How can I change the default order between letters of an alphabet?

I'm writing a book in Persian. In its index there is a problem. Words are using Arabic order! So it causes a problem as in Arabic language they don't have four letters 'پ p (in pen)', 'چ ch (in cheese)', 'گ g (in gas)' and 'ژ zh or s (in usual)'. So these 4 letters are deleted from their main places and these are appeared after all letters but it's wrong, for example 'پ p' should be after 'ب b' and before 'ت t'. I would to see can I define order between letters of an alphabet myself. So I'm not only seeking a solution for the above problem and my question is the generalized form of it (the general case may be useful sometimes).

As some may need an example I wrote one (this is just an example).

The result is as the image. but the third word should be between two others and not the last one! 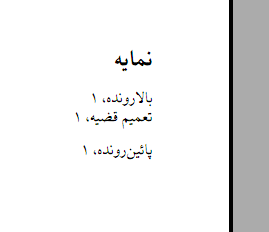 You can use xindy (xindy) for the middle step instead, with the support for Persian being provided by xindy-persian. The easiest way would be downloading xindy-persian to the sub-directory below the one your .tex file is in, and using texindy -M xindy-persian/variant1-utf8-test.xdy file.idx (you can also use variant2, which is slightly different (see README), or change -test with -lang).

Here is the output; I hope this is what you were expecting. 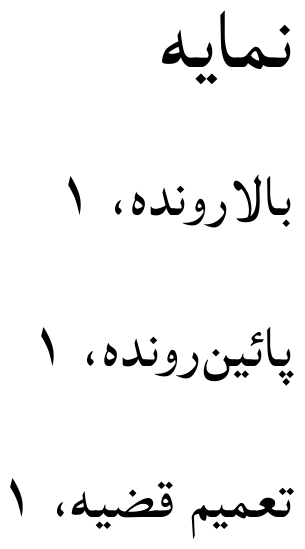 Not the answer you're looking for? Browse other questions tagged indexing languages arabic alphabet persian or ask your own question.

6
How to configure TexStudio editor to use Xindy?

12
xindy : how to add new letters and lettergroups to the alphabet?
14
Farsi alphabet order for glossary
7
Next subsequent letter in the alphabet
15
How to sort alphabet index in Vietnamese correctly?
10
Is it possible to typeset the Ge'ez alphabet in LaTeX?
2
Why might SetMathAlphabet{\mathit} not change the alphabet?
7
Is there a place for one more index processor?
1
How to manually change the index file (.ind) to achieve correct order for foreign letters?
1
Pen-stroke order to write letters of the Arabic alphabet?
0
What the type of this special alphabet?