How can I customise the amount of horizontal space that follows line numbers?

I'd like to increase the amount of horizontal space that after comes each line number in my algorithm (typeset with algpseudocode).

Because algorithmicx in general, and algpseudocode in particular, don't seem to provide any means of such customisation to the user, I rolled up my sleeves and got ready to get my hands dirty: I looked up the source code of algpseudocode and found the following definition (buried in another macro definition, hence the double #):

In order to get a bit more space, I redefined \alglinenumber as follows:

This seemed to do the trick, but I've noticed that

Because this does not happen with the original definition of \alglinenumber (see the first screenshot), I can only conclude that my redefinition is inappropriate.

What should I do to add a bit more of horizontal space after the line number but preserve horizontal alignment?

You need to alter the value of \labelsep for the list. The default is 0.5em. This changes that to 1.5em: 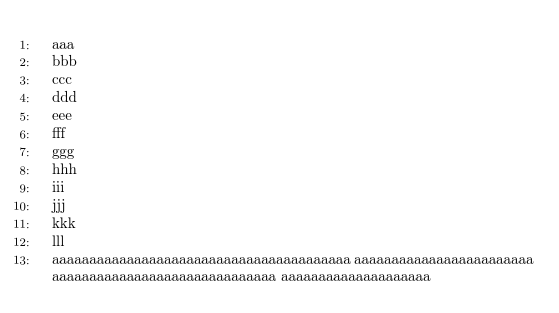 Not the answer you're looking for? Browse other questions tagged spacing horizontal-alignment algorithms line-numbering or ask your own question.