I'm using accents to produce a variant of the \in operator but when I place an accent on it, as in \tilde{\in}, I get spacing that is different from \in, see the example and the image below. My question is: what is the best way to make it so that \tilde{\in} get the same spacing as \in?

In the example below I also provide two failed attempts of getting the right spacing. I'm not especially accustomed to math mode and definitions of operators. Maybe the right way to go with \DeclareMathOperator? 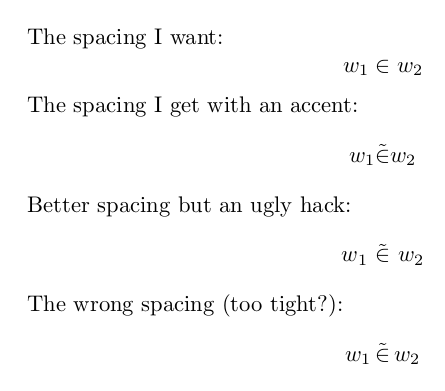 An accented symbol is treated by TeX as an ordinary one; you have to tell it that you want a relation symbol:

The commands for declaring a math symbol are

An ordinary symbol is typeset without any spacing around it. A binary operation is something like +; for example, if one wanted to define a "mod" operation, a correct way would be

As already said, putting an accent over a symbol makes it lose its predefined nature: the accented cluster is considered as an ordinary symbol; therefore we have to state explicitly its nature.

Not the answer you're looking for? Browse other questions tagged math-mode spacing accents or ask your own question.

2
Defining a prefix operator with space before its argument
34
Math mode accents
4
How can I DeclareMathOperator* with spacing after it, preserving the alignment?
8
How to define ReDeclareLargeMathOperator
1
\underline and \overline spacing problem in the definition of mathematical operators
4
Adapting double math-mode accents for different math styles