I have a several items in an 'enumitem' enumerate environment with custom label styles, and I would like to repeat them at various points later on.

As I have said before:

What I tried to do was use \setcounter{enmui}{...} in a later enumerate environment with a reference to the label of the previous item. I had hoped that I could then \addtocounter{enmui}{-1} so that the next \item would have the same label as the one I referenced.

However, I ran into trouble because \ref{somelabel} (where somelabel is the label of an item in the enumerate environment) gives the stylised counter rather than the actual number.

So I tried using the 'refcount' package. But that doesn't seem to work either, and \getrefnumber{somelabel} gives the same result as \ref{somelabel}.

Here is a simplified version of my markup:

I get ! Missing number, treated as zero. <to be read again> errors for each \setcounter (but only on the second run through). 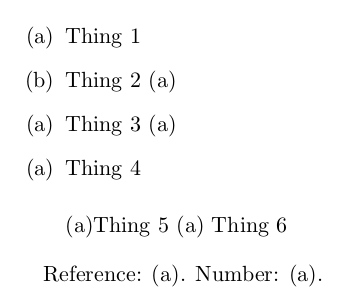 So despite latex's protestations, it does seem to be setting the counter right in the first enumerate (though in fact it should be (b), since I haven't decremented the counter by one; and it also prints out extra (a)'s).

However, in the second enumerate, it fails to even form a valid list (I get ! LaTeX Error: Something's wrong--perhaps a missing \item. errors too).

I know this could be achieved by defining a counter for each item, or even hard-coding the values, but I'd rather do this with labels and references if possible.

Thank you for your help!

I am not entirely sure I understand everything you are trying to do but maybe this will help:

ref= sets the format for the label when used in references. By default, it is set to the value of the label, but you can override this as shown. You don't really want an enumeration when repeating items. You specifically want to repeat the earlier label, so I would use an itemize here with explicit labels constructed from the references. 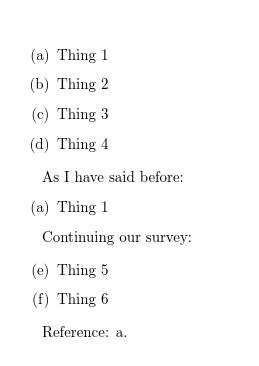