How to make "old-style" the default for numerals?

This uses Latin Modern which is a revised version of Computer Modern. 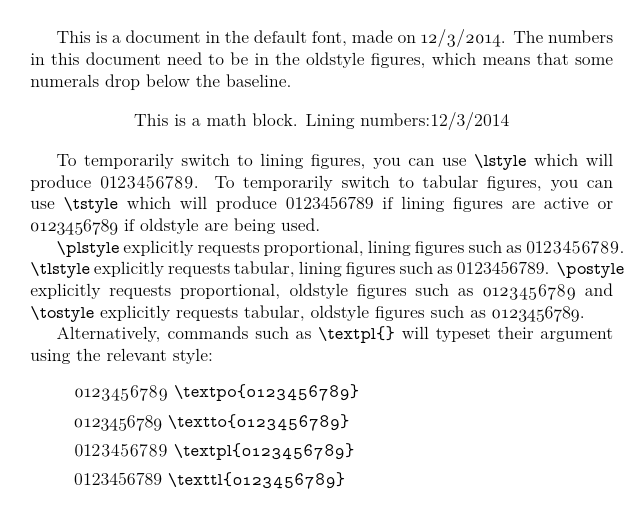 Note that, as Mico points out, this has nothing to do with Old English which is a historical ancestor of contemporary English, used long, long before figures were typeset in any style at all! Usually, these figures are called oldstyle (OSF) or sometimes just text or hanging, while the more modern-looking ones are described as lining.

Oldstyle figures are usually, but not necessarily, also proportional i.e. a figure '1' has a smaller width than a figure '8', for example. In contrast, tabular figures have equal widths. Latin Modern actually provides oldstyle tabular and lining proportional figures, as well as oldstyle proportional and lining tabular. This is worth bearing in mind as it affects the options for cfr-lm and the effect of font commands which switch between styles.

will use lining, proportional figures as default - not lining tabular.

Not the answer you're looking for? Browse other questions tagged fonts oldstylenums or ask your own question.

2
How do I set oldstyle figures as default numbers for the latex default font?
0
How to use lowercase numbers in-line?
6
How does one make a thousands glyph that scales appropriately?
3
Is there a way to use baskervald font and old style numbers for whole document?