Lowercase pi that is shown correctly in sub- and superscripts

I am looking for a way to define a new mathematical symbol, namely a lowercase pi, that will resize according to the font size of the surrounding text. The normal \pi will not suffice as I am already using it to denote the constant 3.14... I am also using \varpi for something else. I was thinking that a lowercase version of \varPi, that is \scriptstyle \varPi, would work. Basically, I want something like:

and so on. It is important that the lower case pi looks like \scriptstyle \varPi because I am using it to denote a realization of a stochastic process denoted by \varPi.

The macro typesets \varPi at the size used for subscripts, but taking into account the current style.

This approach uses the scalerel package to scale the \varPI to the same vertical extent as an x in the local math style. Thus it automatically works for sub- and superscripts, as well as in all cases of \scriptstyle and \scriptscriptstyle. 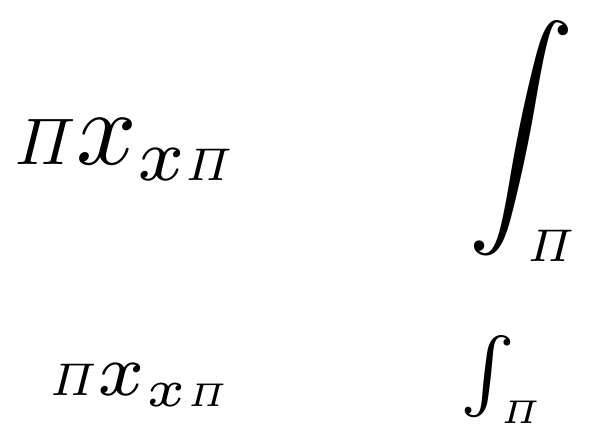 Not the answer you're looking for? Browse other questions tagged math-mode fonts symbols fontsize or ask your own question.