TiKz 3.0 introduce pics and I like them, but it seems that they are not as powerfull as I wish. For example I'm not able to use nested pics like this :

Is this a bug, or is this simply how pics works?

There is no error message. Simply (Xe/PDF)LaTeX don't finish the job.

So the problem seems to be inside pic actions.

I give here my partial knowledge of the problem.

I'm not a texpert, and most of the thing that I write here are guesses.

I don't know what is the precise rule, but I suppose that the only styles that are not inherited are the "actions" (as we can reed in the documentation about pic actions : "actions" are drawing, filling, shading, and clipping or any combination thereof).

I don't know how exactly styling pics works, but my investigation (not of the code, because as I said I'm not an texpert) leads me to the following algorithm :

So pic actions is useful when we want to inherit some action, let say fill from 'some style' to a path that is inside 'the pic code'. And this is well documented in the doc.

The problem with 'pic actions'

which is not what we observe for some "ordinary" style, like :

So probably here is the key why using pic actions in nested pics fails.

I think that pic actions must be used only for simple inheritance. But still there is a bug in pic actions, because when you use it in nested pics latex freeze without throwing an error.

When we need more complexe inheritance, we need to use some styling as shown below.

How to overcome 'pic actions'

Here is an example of how we can create complexe picture with complexe style and realy complex nesting (it works in a fashion similar to @cfr answer). 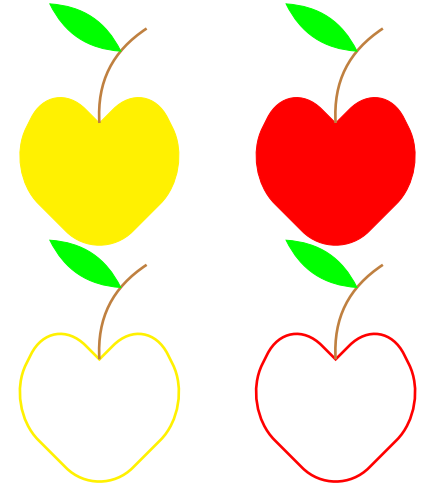 You could pass the options you want as an argument to two:

11
How to make a simple drawing of an apple using only the tikz library?
27
Can a shape be composed out of "subshapes" in TikZ?
9
Nested tikz pics?
12
TikZ: Named nodes in nested `pic`s
4
Parametric Pics : Pic Actions at Infinity

17
Numerical conditional within tikz keys?
18
TikZ: Drawing an arc from an intersection to an intersection
12
Drawing rectilinear curves in Tikz, aka an Etch-a-Sketch drawing
1
Close scope for global options in a tikz-pgf path
9
Line up nested tikz enviroments or how to get rid of them
9
Nested tikz pics?
3
Document header with tikz