I'm attempting to draw an image similar to this one:

However, I only want to draw three nodes as text ("A", "B", "C") with double headed arrows and the larger overlapping circles....

I've had marginal success with the following: 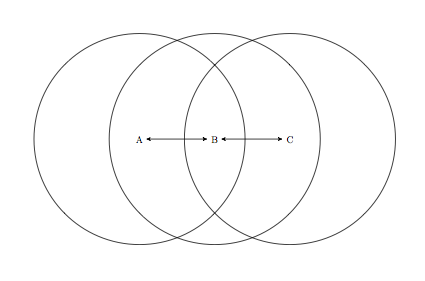 Not the answer you're looking for? Browse other questions tagged tikz-pgf circles or ask your own question.

4
UML Statediagram
11
How to define the default vertical distance between nodes?
12
Numerical conditional within tikz keys?
3
TikZ diagram: concentric circles and 'freehand' curves
2
Tikz: Lining up input and output nodes in multiple input multiple output diagram
6
Problems with nested TikZpictures
1
Concentric arc arrows in TikZ
0
The order of execution of options (draw & font), pgfextra, and a node along a TikZ path
3
Symbol inside a circle in a table
6
Draw double line with empty interior in TikZ