LuaLatex, \includespread and libreoffice table with %

I've using LuaLatex for the last couple of days and been enjoying it despite of lack of documentation on \includespread. Nevertheless, got it to work for tables that don't have a percentage value (e.g.: 10% in a cell).

Is this a bug or a feature? How can I include a spreadsheet with percentage values?

OP provided some test files, which showed few new issues. Those issues should be fixed now and updated package will find its way to CTAN and TeX Live soon, hopefully.

There is one issue with your code:

you use \begin{tabular} without specifying columns, and TeX parser reads next token, which is \includespread. So it is newer executed. As you defined template table_3c as full tabular environment, you really don't need to start tabular here and just use \includespread alone.

Result of your sample: 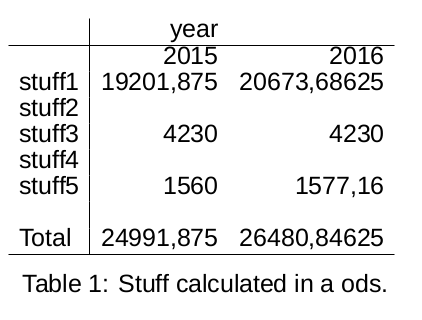 I suppose you are talking about my odsfile package. Behaviour you describe is a bug which was fixed some time ago, but I haven't posted fixes to CTAN until today (I am really bad in posting stuff to CTAN). So thank you for remind me. Some other bugs were fixed as well in this release, so you should update your TeXLive distribution as soon as the update gets here. 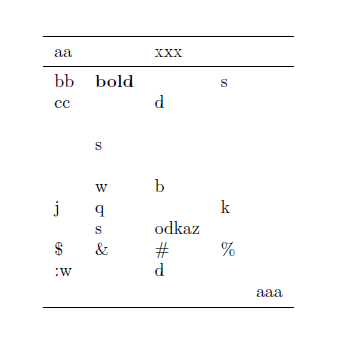 you can see from the screenshot from PDF generated from ODS spreadsheet that not only special characters such as % or $ works, but also some basic styles such as bold text works, as well as external links

Not the answer you're looking for? Browse other questions tagged luatex or ask your own question.

20
Lualatex: Font table with examples
31
Insert libreoffice table as input
3
bidi's undefined environments in (my) LuaLaTeX system
22
Switching to lualatex: How to translate font setups?
5
lualatex-luatextra math mode issue
22
Can we stop recommending fontspec as first choice in case lualatex is used?
8
Does LuaLaTeX mess with pagetotal?
1
Table Resizebox with lualatex
1
How to increase the setting dest_names_size using lualatex on TL 2021?