Subscript glyphs in OpenType math fonts. Where are they?

This is a follow-up to this question.

The accepted answer tells me that OpenType math fonts typically include (in the same font file) optically scaled glyphs for script and script script sizes. I have looked for these glyphs in the Cambria font and in Latin Modern Math, and I can't find them. I have tried using the Windows Character Map app, and also tried opening the fonts in FontForge. No luck.

Can someone tell me the code points (hex indices) of these subscript characters, please, so that I can hunt them down.

Edit
I see that Unicode includes

But I have read that these should not be used for mathematics.

Unicode is not the only way to access a glyph. Glyphs also have names and an index number ("slot"). In the case of the script and script script the glyph names are build by adding st and sst and you can use these names to find the slots and the glyphs: (I'm setting the math font as main font to avoid to have to struggle with the mathcodes). 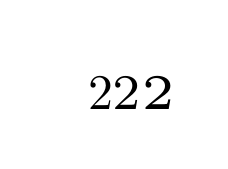 The tables below show the information I was trying to get for the "math italic" letters in the Latin Modern Math font. The first column shows the slot occupied by a glyph, and the second column shows the glyph's name. As explained in Ulrike's answer, you get the names of the corresponding "script" size letters by appending ".st" to these names. So, for example, a script size "n" has the name "u1D45B.st". Similarly, script-script size glyph names are formed by appending ".sts". 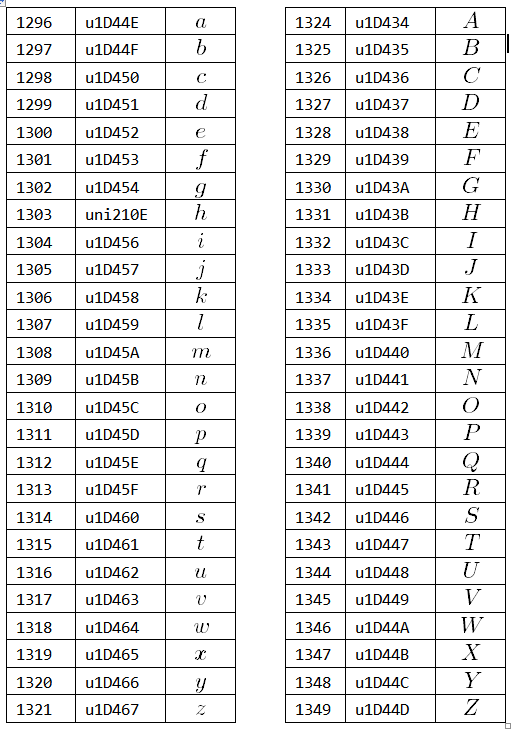 Given the name of a glyph, you can easily find it in FontForge.

The names or "slot" numbers can be used to enter the characters into TeX documents. For example, you can insert a script-size $n$ by typing

In fact, the script-size "$n$" is in slot 1417 in Latin Modern Math, so you could also insert it more directly using

Obviously this is a bizarre and roundabout way to get an "n" into a TeX document, but I have found that knowledge of slots and names is occasionally useful in some odd-ball scenarios.

Not the answer you're looking for? Browse other questions tagged fonts opentype or ask your own question.

13
Replacing greek glyphs in math mode
7
unicode-math and various fonts fail at giving decent spacing in formula
19
How to use OpenType fonts with plain-LuaTeX?
3
Subscript scaling with Latin Modern Math
8
Use of Script-size and Script-script-size glyphs
3
Which sized Latin Modern Math delimiter glyphs correspond to Computer Modern Extended (cmex) glyphs
17
Are there opentype sans math font(s) under development?
11
Context : How to install and use new opentype (math) fonts?
2
Generating PDF files with OpenType math fonts and no font embedding
1
OpenType Math fonts - What is the purpose of the Latin Supplement, Extended A, B character sets and unicode fractions sets?