How to make a graphic fill the rest of a given space?

Sometimes I use a figure numbering style in which each number is placed to the left of a figure. When using this formatting, I try to make sure that the space occupied by a given number and figure is confined by the same margins as those set for the main text. This creates a nice alignment effect. I have tried to achieve it in LaTeX by using two minipage environments inside a figure environment and some simple mathematics:

This code, however, didn't work quite as I expected: as you can see in the picture below, the figure sticks out onto the right margin. 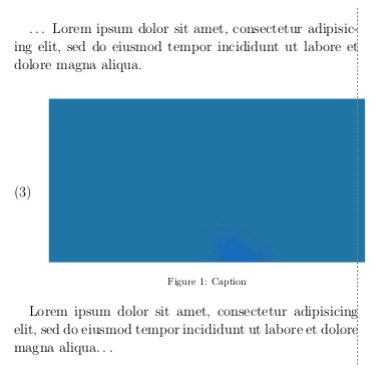 How can I ensure that the figure fills up the space next to the number while being neatly aligned with the body of the text?

(Incidentally, I would also be very grateful for some suggestions on how to make the number and the picture aligned at the top.)

This is caused by spurious spaces in your code. Line endings are taken as spaces which add a little bit more distance between the minipages. Simply place % at the lines ending with } or {. Alternatively place an \unskip direct before the second minipage. The following code should work:

You can also write it a little simpler by using \dimexpr (introduced by eTeX):

Note that inside a minipage the \textwidth refers to the minipage width.

Not the answer you're looking for? Browse other questions tagged graphics horizontal-alignment margins or ask your own question.

30
Is there a way to measure the remaining space of a line of text?

17
How to make a landscape table fill the whole width?
8
Two figures side by side with text wrapping
2
Removing space after a graphic
1
How to make a graphic to continue on next page?
5
Reserve the same space a given picture would take
0
how to make a graphic bigger
3
How to make \Rightarrows before equations left-aligned, while keeping the rest of the equation centered?
0
Image fill rest of a page that already contains text