Poor Kerning in pdfLaTeX output, am I doing something wrong?

The problem I've noticed is that kerning seems to be very poor in my output. I say "seems" because, since I'm kind of a TeX neophyte, I'm not sure if my issues is merely typographical ignorance. I don't think that's the case here, but one can never be certain.

With all that out of way, here's a screenshot I made to show the issue I'm having: 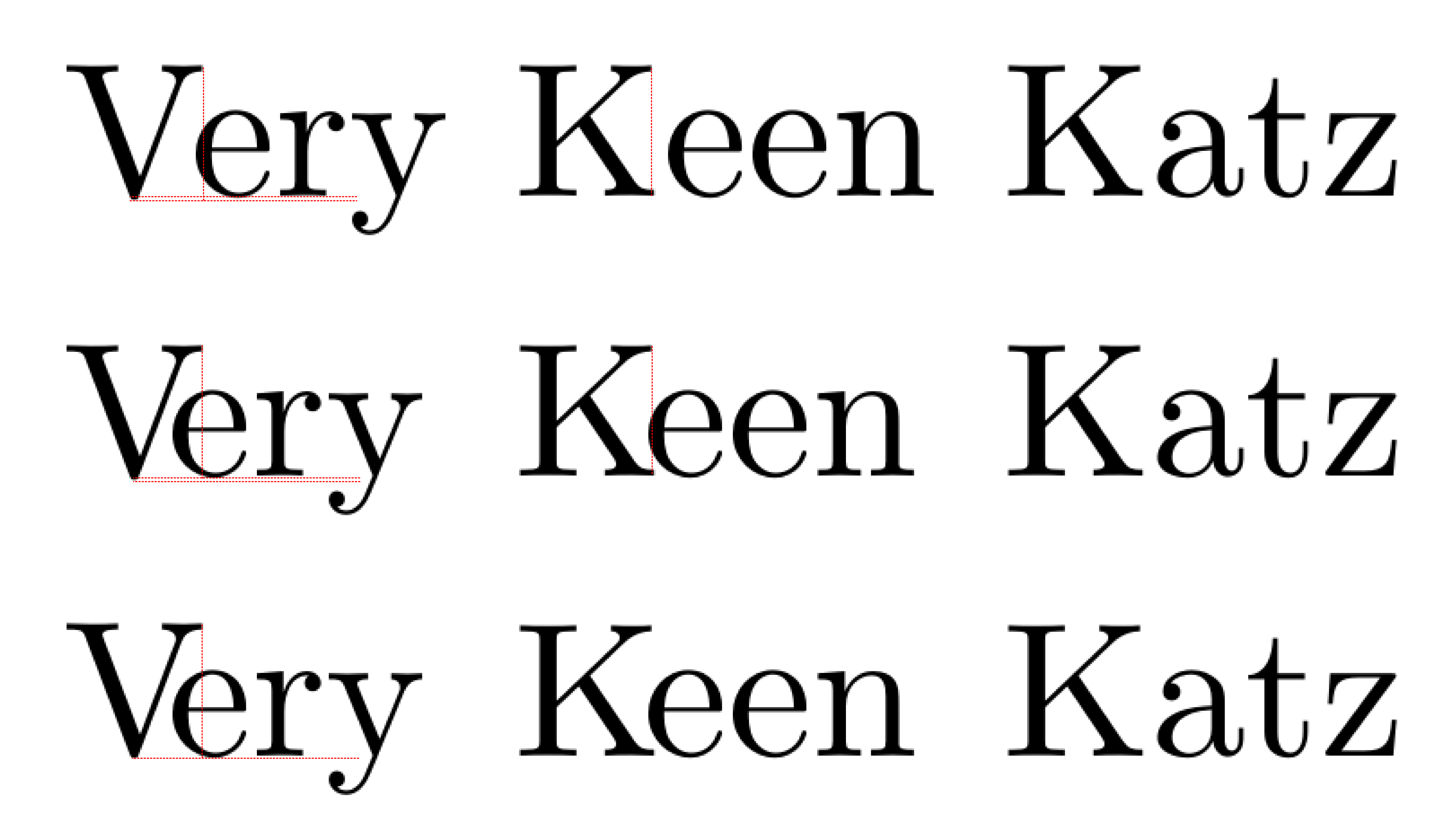 (I apologize for the small red lines, but since we're talking about rather small margins, I didn't want the lines to hide the issue.)

Anyway, the first row is a screenshot of the output from pdfLaTeX. In the second row, I basically manually kerned the output in the first row using GIMP. The third row is a semi-separate issue (that might be related) that I'll get to in a moment. So if you look at the first row, you can see that in "Very" the "e" is at least partially kerned, there a slight overlap between the edge of the "V" and it. However, in "Keen" there does not appear to be any kerning whatsoever. I am not sure if that is just how it's supposed to be, or if I'm doing something wrong, but it certainly doesn't look right to my eyes.

Now, getting to the third issue, if you'll take a look at the "V" you'll see that the bottom descends a little below the "underline" (I'm not sure what the right term is) of "ery". In the third row, I tried to manually fix this. Now, is that just how "V" is supposed to look in Computer Modern, or is there something wrong here?

You can see which kerns have been added by adding \showoutput to your document.

Showing that the only kern added is between V and e. Of course that isn't the full story about white space between the letters as the font designer can also specify the advance width of each character which may be wider or in some cases less wide than the visible width of the actual glyph, so affecting the sidebearings of the characters.

If you choose a different font you get different results, here, much smaller inter-word spaces, and additional kerns between K and e and r and y.

In most typefaces, letterforms with angled bottoms such as 'V' extend somewhat below the baseline, because the narrow point appears shorter to the eye than it really is.

Your manual kerning is very overdone. Remember that kerning is done to make the text 'look right', whatever that may mean, rather than to conform to some mathematically precise spacing between the letterforms.

Not the answer you're looking for? Browse other questions tagged pdftex pdf kerning or ask your own question.

41
How to properly typeset footnotes/superscripts after punctuation marks?
1
title page "sharpness" (for lack of a better word)
7
Combine kerning, small caps, and tracking in luatex
4
Getting right-to-left output in Arabic and Persian/Farsi with pdfLaTeX
0
Math kerning in Beamer with XeLaTeX vs. PDFLaTeX
7
How can I improve the kerning of citation footnotes made with natbib?
12
Fix ugly kerning in equation subscript
1
Proper kerning of \{f\} \sigma_0 in TeX Gyre Termes Math
3
LuaLaTeX: GSUB/GPOS multiple glyphs per type only partially kerned