I need some arabic entries in a twocolumn index. The following document should work, I think:

But it leads to the error:

In my project it has only one visible consequence, namely the following \clearpage does not work any more. Instead of filling the page with blank space, LaTeX stretches the page to full height as with a \pagebreak[4].

I do not have the choice to use other packages since this is part of a large project. What I need is a fix... Any ideas?

(Previously, I used \twocolumn instead of \begin{multicols}{2}...\end{multicols}. This comes from the standard definition of theindex. But that does not balance the last columns.)

Edit (15:56): It seems that a patch for \a@Rinsert in apatch.sty is responsible for the problems. The original version in abidir.sty works fine for my purposes:

The only difference in apatch.sty is the use of \a@@Rsplit instead of \a@Rsplit. That replacement function \a@@Rsplit is much longer and seems to cover more stuff... I'll try to use the old stuff by

Maybe that helps even if I trade in some other bugs... Keep thumbs crossed that they do not affect me.

It seem that your code work fine if we use arabtex environment for arabic paragraph . For small text (few arabic words) you can put them inside mbox like this: 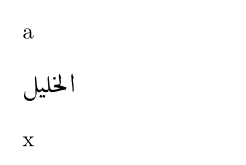 Not the answer you're looking for? Browse other questions tagged multicol arabic or ask your own question.

6
Avoid: multicol Error: Error saving partial page
4
How do I break a line without breaking a column?
8
how to make ragged bottoms of columns in multicols when preventing page breaks?
3
Conflict between mdframed and arabic babel
2
How to place the figure caption to the left/right? Not aligning, but moving it
1
How to create a Multicol within a Page-Frame spanning multiple pages
2
environment to balance a table in a multicol
1
How to center a caption beneath a figure when using wrapfig in a two column (multicol) configuration