I have the following simple tabular environment:

And this is the result: 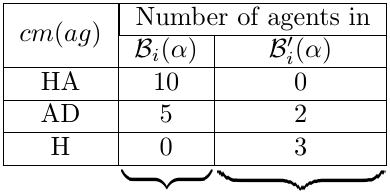 Why the two columns in the figure are not equally wide (one would expect it naturally to happen)?

The third column is particularly wide as it has been stretched by the multicolumn entry. It is best to ensure that the natural width of a spanning cell is less than the width of the columns it is spanning.

In multicolumn, only use | on the right edge of a cell, except for the first column, otherwise you get duplicated double thick lines as seen in your image.

I left $cm$ as I do not know what it means but it looks a bit odd: if cm is to be read as a single word rather than c times m then it ought to be \mathit{cm}.

Here I used dcolumn to align the digits of the numbers and force the natural widths of the columns to be greater than the heading.

I also added some extra padding to keep the horizontal rules off the text.

The issue you've noticed arises because the natural widths of columns 2 and 3 are quite small and because the width of the combined header, "Number of agents in", is more than twice the width of each individual column.

One way to address this imbalance is to force the widths of the next pair of header cells, $\mathcal{B}_i(\alpha)$^ and $\mathcal{B}'_i(\alpha)$, to exceed the natural widths of the columns; moreover, it's (probably?!) a good idea to make the equally wide. To generate the first table shown below, I set up a little utility macro called \mybox that typesets its argument centered in a "box" that's 1.25cm wide. (You're obviously free to choose a different width, but I wouldn't go below 1.0cm.)

A separate issue with your table, as currently defined, is that it's not all that readable: the multitude of lines mainly provides clutter, not clarity. The result of (i) getting rid of all vertical lines and two of the horizontal lines and (ii) using the rule-drawing macros of the booktabs package instead of the basic LaTeX \hline and \cline macros is shown in the second table below. I hope you'll agree with me that it's at least as readable as the first table is. :-)

Not the answer you're looking for? Browse other questions tagged tables multicol columns or ask your own question.

12
How to get multiple multirows in a table?
3
Paragraph column in tabular working only in the first column
2
Exhaustive Information about text alignment in Tabular
3
Problem with \tabular \tabularx and \multicolumn
7
tabu package - gaps in vertical lines
2
\multirow in the tabular environment
5
Vertical alignment of figure in multirow-cell inside tabu table
1
How to set longtable width to text width so that the text in cell wraps around automatically?
2
Substitute a space to a string to force tabular cell separation