Where to find the “spiffy new printings” of Knuth's Computers & Typesetting books?

On Donald E. Knuth's website, Knuth states that "new and updated printings of Volumes A, B, and C became available in April, 2012", but I cannot seem to find these anywhere. Knuth describes these "spiffy new printings" as "fresh versions that are essentially perfect", being "significantly better in hundreds of small ways" compared with the Millennium Boxed Set. The InformIT website does not seem to list any of them; in fact, InformIT does not seem to list any books in Computers & Typesetting series published more recently than 2000. Perhaps they are published by another publisher?

Where and how can I obtain the "spiffy new printings"?

N.B. questions similar to this have been asked but closed as off-topic; this is odd to me since there is a tag called {books}, "for questions which deal with books about TeX, LaTeX and other topics of this site". Therefore this would seem to be very on-topic to me, and is certainly pertinent to my sincere and pertinent interest in learning TeX. I reviewed What topics can I ask about here? and What types of questions should I avoid asking? and do not feel that my question is off-topic.

This is rather more complicated than it appears.

The new printings involve the hardcover editions of the Computers & Typesetting volumes. The situation as of October 2012 was described in my TUGboat column, and I won't go into all the details here.

These are new printings, not new editions, so most booksellers don't distinguish, and it's generally not clear whether what is being sold is the new printing or an old one. To quote from my column,

[...] if you order through the member link on the TUG bookstore page, and specify that you want only the new printing but receive the wrong printing in error, a message to the publisher's customer service should result in a prompt correction.

It's likely that the new printings are the ones in common circulation now, but it never hurts to be careful. Besides, TUG does get a small commission on books sold through this offer, and that goes to help support CTAN and other TeX-related endeavours.

Yes, they were published in 2012. WorldCat (www.worldcat.org) shows that only one library in the United States and only a few libraries in Germany own the set: 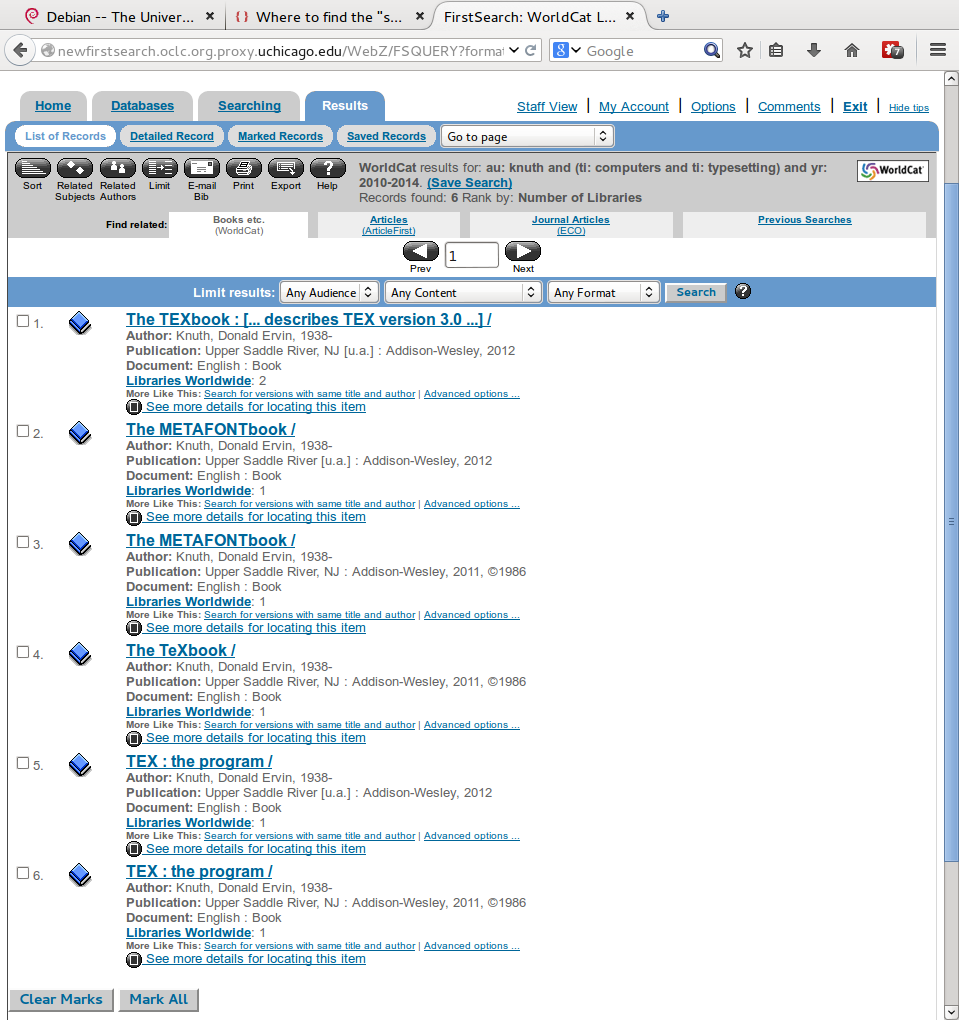 (One might have thought Stanford would buy a copy, at least... It might just not be in the WorldCat database yet.)

Not the answer you're looking for? Browse other questions tagged books or ask your own question.

65
Where can I find good ConTeXt documentation
58
Should I read Donald Knuth's The TeXbook?
59
Are there any good general typesetting books / references?
31
Are there good books retracing the history of (La)TeX?
38
List of books written in LaTeX with the source available
8
Where can I find LaTeX and its package installation guide in details?
3
The Herbert Voß series of LaTeX books