What is the reason behind why > and < don't display properly without T1 font encoding?

I've read a number of posts that ask about why the symbols > and < show up incorrectly as ¡ and ¿. The solution is to use the T1 font encoding. Okay.

Also, I know, for example, that the original OT1 font encoding (section A.1) does not include these two symbols. Okay. But then why do \textless and \textgreater generate the right glyphs and where do these glyphs come from? There are other characters, such as the blackslash () and the pipe (|). I suspect similar reasons for these?

Computers don't deal in symbols, they deal in numbers and < means character 60 in the current font and in the OT1 encoding that is an inverted exclamation mark. In a T1 encoded font and any other font encoding based on ASCII or Unicode that slot is a less than sign.

The default TeX fonts are designed for a different era and are 7-bit fonts (or at least 8 bit with all the top slots empty, so, on the assumption that < should be in math anyway so not needed in the text font, some slots were used to squeeze in additional symbols.

\textless and friends are defined to pull characters from the math fonts if OT1 is the current encoding.

The historical reason is that TeX was initially developed in the late seventies of the 20th century, when seven bit was the norm (the eighth bit in a byte was used for parity check).

The fonts developed by Knuth use just seven bit, so they can accommodate only 128 glyphs. In order to make available as many useful character as possible, Knuth had to discard some of those that rarely appear in normal text.

The first 32 slots were free for various symbols, but uppercase Greek, accents and f-ligatures already fill up 23 of them. Then the dotless i and j and the letters ß Æ æ Œ œ Ø ø make for 32.

Important text symbols such as the open double quotes, en-dash an em-dash, as well as ¡ and ¿ aren't in ASCII, but are used in text.

Conversely, braces {}, less than and greater than <> are much less common in text.

Just a trade-off. Note that there wasn't Unicode at that time and so a ligaturing mechanism was introduced for typesetting !¿–—.

When TeX started to spread also in Europe, the problems due to missing hyphenation point when words with accented letters were used pushed the development of a new font encoding and T1 was born, where the range of printable ASCII character (32–126) contains the ASCII characters proper.

In my opinion the presence of the uppercase Greek letters in the original font encoding is an error. But one of the aims of Knuth was not to leave any slot unfilled, in order to avoid proliferation of different ways to fill them.

These 2 lines are included in latex.ltx:

What this does is define these two commands so that they use the currently active font in the OML encoding, which is primarily used for mathematics. Hence, they do not rely on the OT1 encoded fonts at all.

When you use the T1 encoding, these defaults are overridden:

which ensures that the commands use the currently active font in the T1 encoding. Hence, if you use different fonts for mathematics and text for some reason, these commands will behave as expected with T1 but not with OT1 because, in the latter case, the mathematical font will be used even in text mode (because the symbols aren't otherwise available at all).

Similarly, the default definitions for \textbackslash and \textbar use OMS, another mathematical encoding, and, again, if you load T1, these are overridden to use the T1 encoded font.

All of this was necessary because originally, TeX could only use font encodings with 128 slots. T1 has 256, a number which only became possible later in TeX's development.

Note that one reason for substituting these characters in OT1 rather than, say, putting ¡ and ¿ in an alternative encoding instead is the dependence on ligatures described in egreg's answer. TeX can only use ligatures within a single font encoding. So if, say ¿ had not been in OT1, it would have been impossible to make

produce ¿, for example, without also putting ? and ` in the other encoding. Because kerning information can only be used for character pairs within a single encoding, that, in turn, would have made it impossible to have appropriate kerning for characters preceding or following these symbols.

Look at the font tables for the following minimal example: 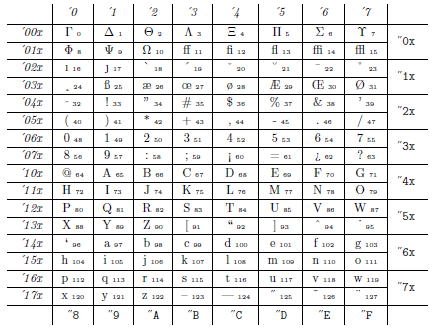 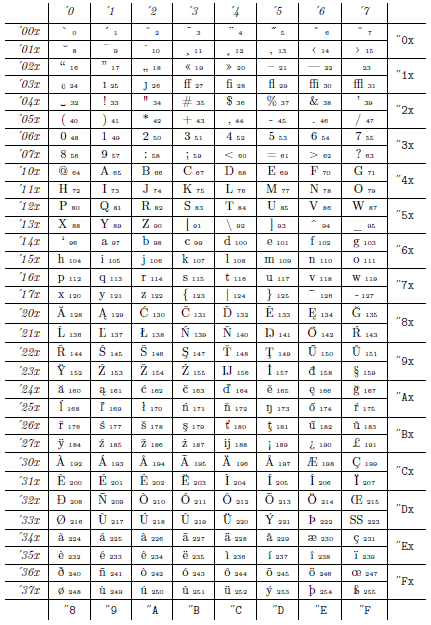 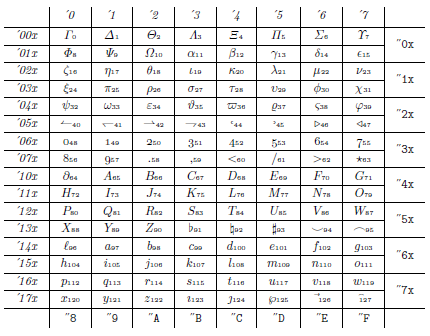 Specifically look at positions 60 and 62.

Not the answer you're looking for? Browse other questions tagged font-encodings or ask your own question.

22
Why words with accented characters can't be automatic hyphenated with the default OT1 enconding?
49
What is the difference between font encoding and input encoding?
9
Deciding Which Glyphs to Use in Font Encoding
9
What is the difference between the hyphen-like characters #45 and #127 from the T1 encoding?
3
Reliance on "default" ligatures (!`, two hyphens, two straight apostrophes, etc.)
15
What is the recommended way to respond to bug reports for font packages where the bug is caused by characters missing from fonts?
8
Tool to find characters encoded differently in T1 vs OT1
19
Why does inputenc abandon so quickly under "utf8 based engines"?
3
L7x font encoding ellipsis issue
1
Many glyph enconding / one program. What is the importance of the concommitance of OT1 and OML?