Border around a caption but not the figure

I'm looking to get a border/box around the captions for my figures and tables, but without wanting to border the figure/table itself as well. I currently have something that works, but the box takes up the whole text width, and I can't find a way to get it to fit the width of the caption (which is constant, thanks to the caption package).

How can I reduce the width of the frame so that it fits the caption?

This uses the tcolorbox package and a lot of its options to generate a framed caption, although this looks a little bit strange, in my point of view. 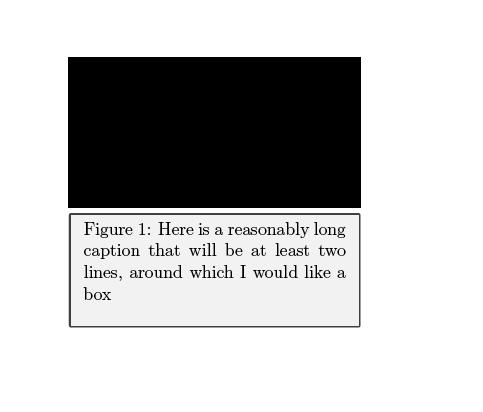 Not the answer you're looking for? Browse other questions tagged floats captions framed or ask your own question.

20
Border or frame around figure
31
Include centered full page figure with no margins
3
Box around caption in figure
7
Table caption not appearing in PNAS document class
3
Maximum figure width when using bmcart class
2
Centering figure but not caption
2
Adding border around figure and caption
2
How to place the figure caption to the left/right? Not aligning, but moving it