and compile with pdfLaTex, the output .pdf file is created and looks good. My sourcefile doesn't. 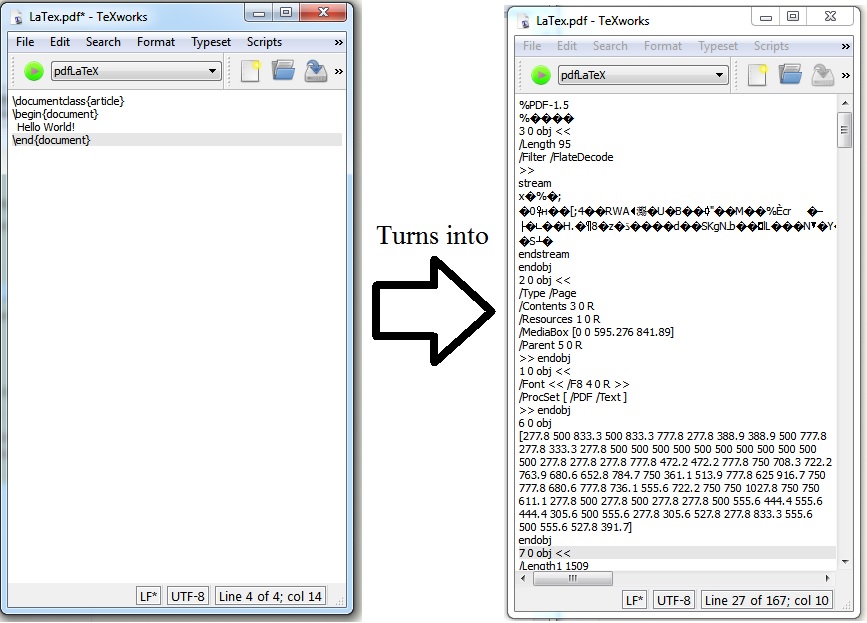 In this case, it is obvious what happens because of using the output extension for the input extension. In olden times, one rather subtle but quite dreadful mistake you could commit was writing

which resulted in LaTeX writing auxiliary data on a file chapter1.tex.aux which the DOS file system abbreviated to chapter1.tex which was then gone.

Later versions of emTeX were smarter about what file names it would overwrite, and when it would refuse. But this trap was present in several DOS-based TeX distributions.

I'm still somewhat surprised by TeXWork's behavior: I'd have expected LaTex.pdf (cough cough) to be compiled into LaTex.pdf.pdf without conflict. Or at least, like emTeX in olden times learnt to do, to refuse overwriting the original file. I almost fear that this behavior could result in resuscitating the above-mentioned age-old \include catastrophe.

Not the answer you're looking for? Browse other questions tagged pdftex texworks or ask your own question.

13
Conflict between color, graphicx and libertine
27
Generating PDF/A-1b compliant documents using pdfx and pdfLaTeX
0
How to remove i£ij at the bottom left corner under my abstract