I'm trying to create symbols \opn for "open subset" and \cls "closed subset". I want them to look like this:

My current solution is:

But the problem is when I use this, Latex doesn't treat \subseteq and \circ as a single symbol, so the spacing is incorrect when for example I write $U~\!\!\!\opn\!\!\!~X$:

How can I make the position of the circle be fixed in the middle, so that \opn becomes a single symbol that is resizable, i.e. responds well to \huge?

Edit: @egreg @MartinScharrer: When using your command (to define the stalk of a sheaf)

Currently, I like this edited Martin's solution the most aesthetically appealing:

but there is still a problem in the above code. Could anyone edit this last code to fix the problem with spacing?

math-mode symbols relation-symbols
Share
Improve this question
edited May 2, 2015 at 8:57

Here is a possibility:

The symbols will change size according to the context. They don't reduce in subscript or superscripts, for that something more is needed.

This is a case where \ensuremath is superfluous, since the symbols will always be used in math mode, except perhaps in their definition, where adding $ symbols around them is not much of a hassle.

The low level \ooalign command is one of my favorite tools. I'm telling TeX to superimpose the two symbols, the circle or bullet is aligned at right, but pushed left a bit by \mkern.5mu and raised with a font dependent dimension (the amount 0.225ex has been computed by trial and error). Act on \mkern.5mu if you want to push the circles a bit more to the left.

A quick course on \ooalign

where instead of \\ one has to write \cr, but all rows are printed on top of each other. It is customary to use \hidewidth instead of \hfil to get an entry centered with respect to the widest one and actually it has its benefits.

Let's see an example from plain.tex (the LaTeX definition is similar, and this one is simplified): we want to put a cedilla after some non standard character.

Here \char24 is the cedilla in the usual Knuth font encoding; it's a character that sits just below the baseline, so for characters that don't have descenders, we can print the character (#1) and superimpose to it the cedilla (it will go under it, of course). With \hidewidth\char24\hidewidth we pretend that the cedilla takes up no horizontal space, so the resulting block will be the same width as the character; we don't even need to know how wide is \char24.

If we want to build a "supinf" symbol, superimposing \land and \lor, we can define

Here \mathbin says that this command must be used in math mode and the symbol is considered as an operation symbol.

The command \hidewidth just adds a large negative space (it's \hskip -1000pt plus 1fill compensating it with infinite stretchability. A table cell where \hidewidth is present will never be the largest one.

Caution
Always enclose {\ooalign{...}} in a group as shown here and in the definition of \c, otherwise nasty surprises can spoil your masterpiece of typography. In our cases, the braces in \mathbin{...} and \mathrel{...} act as group delimiters.

Here's how you can get size changing according to the math style:

(I've simplified your formula just to show the effect of the new symbol; however, such a big formula should always be typeset in display style and with \dfrac.)

A couple of further notes. I used \m@th in order to avoid problems if the document class sets a nonzero value for \mathsurround (but it's rare that it's set otherwise).

The \vphantom{\subseteq} is needed because \ooalign sets the bounding box using the first row for the height and the last row for the depth.

Obligatory Unicode answer: With XeLaTeX or LuaLaTeX with the unicode-math package, you can use ⟃ (i.e. U+27C3 OPEN SUBSET) directly (or use the alias \subsetcirc). There is also ⪽ (U+2ABD SUBSET WITH DOT; \subsetdot) and ⫏ (U+2ACF CLOSED SUBSET; \csub). Unicode doesn't seem to contain a subset symbol with a bullet inside.

You need to place your symbol inside \mathrel{..} so it is taken as a relation symbol. To support different size you should define \raisebox using the ex unit instead.

See also the similar question Overlay symbol with another.

This solution has two salient features. First, it uses the inset feature of the stackengine package to overlay the required symbols using a syntax like

This will work just fine in \textstyle math, and the macros \TSopn (Text Style opn) and \TScls (Text Style cls) are sufficient, if that is all that is required.

However, when symbols are overlaid, and kerned relative to each other, they frequently will appear out of kilter in different math styles, if that is a needed feature of the solution. This is because smaller math style fonts are not merely scaled down versions of the text-style math.

To deal with this problem, I use the scalerel packages feature of being able to scale a symbol to the size of another symbol, with syntax like

where "symbolA" is scaled and typeset to the same vertical footprint as "symbolB".

What I do here for \opn and \cls is to force the versions of the symbols in smaller math size to, in fact, be directly scaled versions of the \textstyle symbols that have been properly kerned. The size to which the original (\textstyle) symbols are scaled is the \subseteq symbol in the current math style. In this way, the reduced symbols will have the proper kerning which characterized the original \textstyle symbol definition.

One possible quibble with this first approach is that, in \scalereling the \textstyle symbol to the smaller math sizes, the stroke width of the glyphs is altered in a way that the user finds unattractive. If that is the case, the scalerel approach can be dispensed with, and replaced with the \mathchoice approach in which the vertical and horizontal kerning is tuned for each particular math style, but using the glyphs associated with the particular math style in force:

I confirmed that both approaches work with the user's problem, as seen here for approaches 1 and 2, respectively:

The following example constructs the symbols from \subset/\supset/\subseteq/\supseteq with \circ/\bullet. The constructed symbol can be resized. 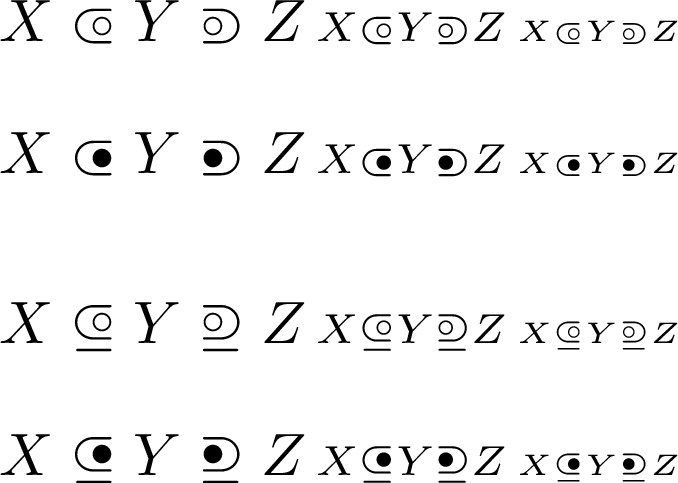 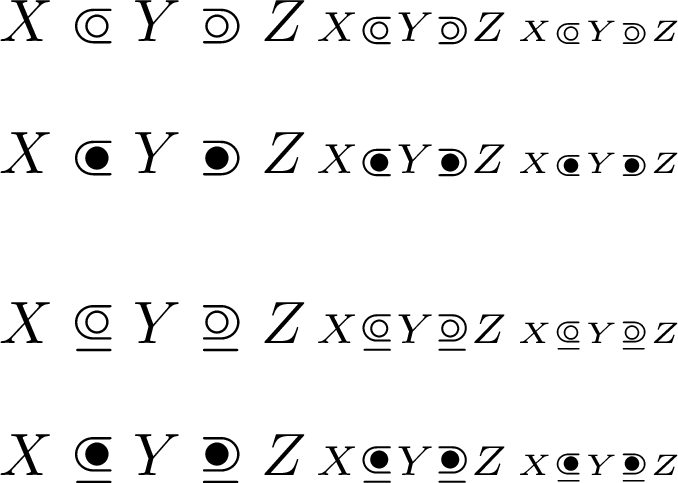 There are OpenType fonts that contain these symbols. They can be used with LuaTeX or XeTeX and package unicode-math:

The symbols can be specified in different ways:

I mean that \ooalign is not typical application for this task because this composed operator is right aligned, no center aligned. When \ooalign is used then you must correct the positioning by special constant (.5mu in egregs answer). More straightforward is to use \llap:

Or, if you need to use this in script and scriptscript size too, then you can define the \opn macro as:

3
LyX: How to combine two math symbols?
2
superimosing {\circ} on {\sum} in {math-mode}
181
\Rightarrow vs. \implies, and "does not imply" symbol
60
How do you make your own symbol when Detexify fails?
43
What's the most elegant way to obtain Dirac operators? (slash notation)
21
LaTeX command for symbol needed. looks like crossed equal
29
How to make a plus sign with arrowheads on each of the four endpoints?
36
Overlay symbol with another
21
What is the LaTeX symbol for "forking independent" (model theory)?
43
Not equal sign (≠) with a vertical bar
See more linked questions

3
vertical subseteq symbol in label of subfloat
10
How to get a double line subset symbol, (but not \Subset)?
5
Double \prec as a single symbol?
3
Drawing dashed `\subseteq` symbol
4
Consistent custom equality and subset symbols
4
Using a smaller subset symbol?
7
How to construct the following symbol (subset with arrows)?
0
Writting text below the "subset" symbol
4
Symbol semi-circ, semi-bullet