I'm using the packages inputenc to allow the use of UTF8 characters and tipa to input IPA symbols, but tipa does not include documentation for the character and has no command to insert it. When I enter the character straight into the text, I get this response in the log:

Is there another way to insert this character? I'm not that knowledgable about LaTeX and the encoding of characters, so my apologies if my question is badly phrased or there's an obvious solution. (I think tipa needs to be updated to include this character, though this is not the place to suggest that.)

Here is a basic approach that compiles with pdflatex. Since this Unicode glyph is not available through the tipa fonts or in the default, you can create it yourself. You might wish to do it differently than in the example (perhaps a smaller size or a different symbol).

The newunicodechar package allows you to make a Unicode character into a control sequence that calls a LaTeX command; in this case you can call the command you defined. It's up to you whether to use the Unicode symbol in your input or just use this command.

Or, use XeLaTeX or LuaLaTeX and just use the Unicode directly with a font that includes that glyph.

A possibly different definition could be

and the result would be

For completeness, here is a unicode solution:

I would recommend using XeLaTeX or LuaLaTeX with a Unicode font that has the [⁼] symbol. In the example below, I chose Gentium Plus because its Greek alphabet matches its Latin/IPA symbols nicely. The easiest way to input IPA symbols is to use a keyboard layout, which are available for all platforms (see my answer to Accessing IPA characters when using Charis SIL). For example, using SIL's MSKLC IPA keyboard layout, the [⁼] symbol is entered by typing ^ and then =. Keeping your .tex input in Unicode (rather than using LaTeX macros for special symbols) is especially useful if you will be copying and pasting text to or from other applications. 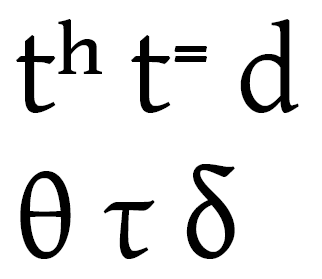 Not the answer you're looking for? Browse other questions tagged symbols unicode input-encodings greek tipa or ask your own question.

5
Diacritics inside an Epigraph in LyX
6
Can I typeset greek letters in text mode using Latin Modern Fonts?
4
Document in Spanish with IPA and Greek, failing in PDFLaTeX and XeLaTeX
6
Why is caron treated differently than breve
2
How to fix “no lowerable accent” error in XeLaTeX?
12
Typesetting phonetic symbols: Unicode or tipa?
2
Sgaw Karen and IPA text (TIPA and fontspec)
5
ucharclasses misbehaves with Spacing Modifier Letters and Combining Diacritical Marks