define a macro with two parameters delimited by optional spaces

I want to define a macro with two parameters which delimited by optional spaces. For example, from the following code

I get one:two others. But if some argument is ended by a control sequence, such as

I could not get \foo:\bar others since TeX will ignore spaces after control sequences.

How could I resolve this problem?

While it is possible to define a macro looking for optional spaces, the primitive TeX syntax for finding a <number> carries out expansion and so it's not as easy as testing if the grabbed argument is a control sequence. Usually in these cases one uses a temporary register so that TeX is still parsing for a number (or dimen, skip, etc.) in the usual way, then use \afterassignment to pick up the value. For example, to grab two <number> arguments we might do

where I've used two scratch registers and a group to keep them 'safe'. (The same can be achieved with one register and indeed a self-redefining auxiliary, but that gets complicated!) This will then work with a range of input syntaxes

Perhaps this can be tamed a bit. But the macro here checks its arguments to see whether they're control sequences and if they are branch one direction and if they aren't branch another. The key is the macro \@ifismacro provided by @egreg to a previous answer noted below: 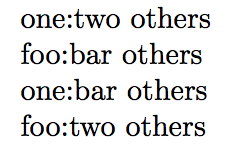 Not the answer you're looking for? Browse other questions tagged macros tex-core or ask your own question.

18
Test if token is a control sequence

12
xparse: Define new command with multiple optional parameters
3
Create a macro that appends some code an existing command, with arguments
8
Storing unexpanded macro definitions (including #1, #2, …) for later use (now includes full usecase)
6
Why are some characters not allowed in command sequences
10
A question about macro matching
0
How to add a framed box inside a paragraph?
5
Define macro for sequence/list/tuple macros
6
What are the values for parameters of an \edef at the time of definition?
3
How to define a macro with multiple optional parameters?