I'm using classicthesis of André Miede and I have the following list of figures: 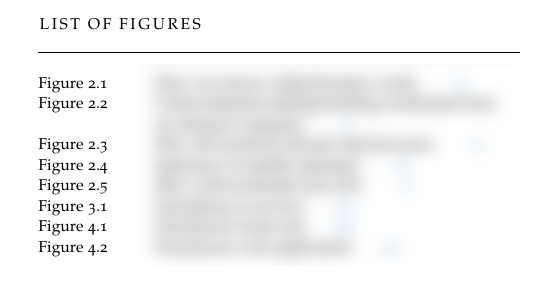 I don't really like the sequence of Figure words (I think it's redundant) and I'm wondering if there's a way to keep only the numbering plus the caption.

Same thing with listings and tables. In chapters, instead, I think it's ok to have "Figure", "Listing" and so on.

I'm not handy with LaTeX so I don't know where to start and even if it's possible!

Add \renewcommand{\cftfigpresnum}{} to your code:

Not the answer you're looking for? Browse other questions tagged table-of-contents classicthesis or ask your own question.