All letters upright in math mode (equivalent to \rm)

I'm using the document class scrartcl and I'm looking for a way to write equations in which all letters are upright like it appears when using \rm.

Because the use of \rm is deprecated my question is: is there way to achieve the same without enclosing every bit of text in \text{}?

If you like the effect of \rm but don't like that it is deprecated, then taking a look its implementation gives a good clue of what you can do. In source2e you will find (see p.254 of source2e 2017-04-15, where \DeclareOldFontCommand is defined)

which means it is just \mathrm in math mode. Thus you could write \mathrm around your equation contents instead.

If what you are after is an easy way of writing \text in subscripts, here's a way. You write A_[something] if you want \text{..} to be applied to the subscript.

It's not clear why you would do this; however, here it is.

The question asks how to write equations, so this is not an answer in that sense. Here, I suggest a method on how to draw them.

Since + is an operation of coalescence, in general, and = indicates identity (such that C is A and B combined together), and since everything algebraic can be represented visually, the TikZ solution 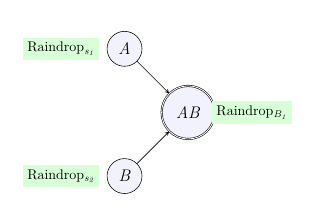 which may be easier for some to grasp, since mixing two styles (algebra and plain language) adds a cognitive load for the reader since they have to untangle the two and then compare how their meanings intertwine.

It becomes immediately apparent upon inspection that the AB combination, C, has properties different to its constituents (e.g., evenness), implying that the identity (=) is only a partial description. A transformation has also occurred, with the creation of a new entity.

The letters can be upright or italic, as one pleases.

Not the answer you're looking for? Browse other questions tagged fonts math-mode equations or ask your own question.

5
Can I make all my math upright?
1
All letters upright in align mode

4
Problem with equation format when starting equation with \dot and \ddot
2
Like displaymath, but without math-mode
4
Sans serif upright greek in math mode
5
Latex Equations: Colour all instances of symbol
1
Font that supports both upright and italics Scandinavian and Greek characters in math?
7
How to globally ensure siunitx units are upright using a math font?
0
A Single Command for Combining Text and Math?
1
All letters upright in align mode
2
Alternative to using inline math mode for single letters?