I am using the commands \frontmatter, \mainmatter and \backmatter to distinguish between the different parts of the thesis.

The document class is "book":

In the book document class, the macros \frontmatter, \mainmatter, and \backmatter are defined as follows (cf the file book.cls):

So, what might be the purpose of executing \backmatter -- other than having a semantic way of creating a pagebreak and forcing all accumulated floats to be typeset? For that, it's necessary to consider what the Boolean macro \@mainmatter[true/false] does. Still consulting the file book.cls, one finds that \if@mainmatter occurs, among other places, in the definition of the macro \@chapter. Here's an excerpt from the definition of this macro:

Let's put all this into a little MWE that contains one \chapter instruction in each of the front-, main-, and backmatter portions of the document. This is how the resulting Table of Contents looks like -- note the absence of chapter numbers for chapters "Front" and "Back", the roman page numeral for chapter "Front", and the arabic numerals for "Main" and "Back".

The purpose of \backmatter is not to change page numbering, which would make very little sense (understatement for “meaningless”).

After \backmatter, chapters are not numbered any more, but they automatically go in the table of contents when specified with \chapter{title}.

Some instututions, that have very little respect for typography and common sense, require that in theses the numbering in the back matter is with Roman numerals, starting where it was left at the beginning of \mainmatter.

If you are subject to such an institution, you deserve all my sympathy. You can achieve this by modifying the definitions of \mainmatter and \backmatter.

But, please, don't do it unless you are forced to under threat on your life/degree.

The front matter ends at page vi (empty) and “Epilogue” will start at page vii.

The \backmatter command has the effect of changing numbered chapters to unnumbered ones, but not to change the page numbering format.

If you want roman page numbering in the backmatter, add the following lines in your preamble: 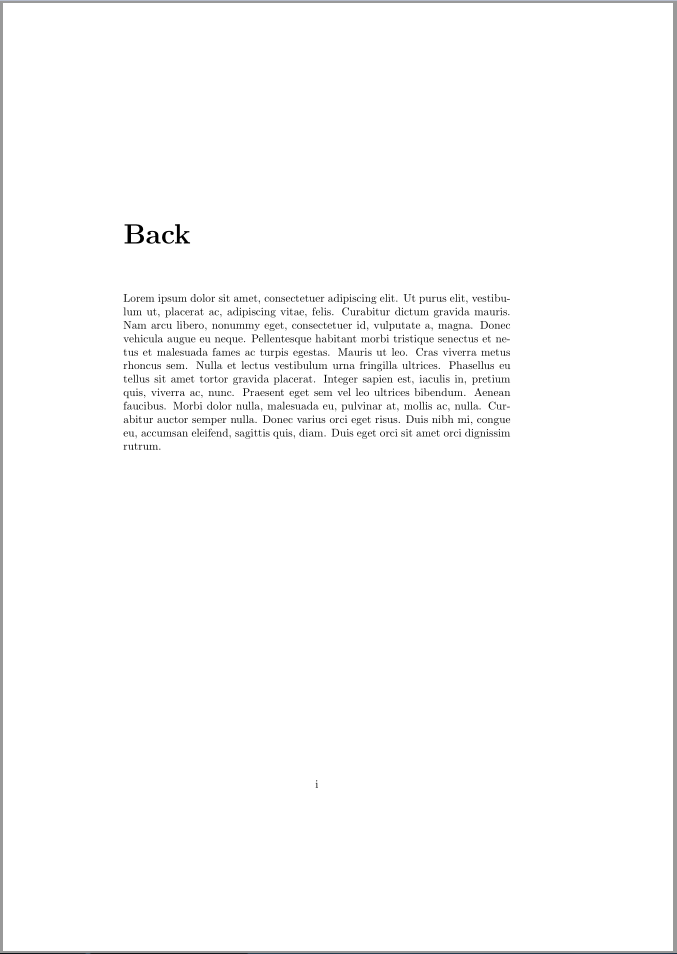 Not the answer you're looking for? Browse other questions tagged chapters book-design or ask your own question.