TikZ: How to connect nodes and specify line direction?

When drawing a line between two nodes in TikZ, you can specify the anchors on the beginning and end nodes in order to control how the line is drawn.

I would like to specify the anchor on the beginning node, and the angle at which the line is drawn, and let TikZ figure out where it will intercept the end node. The usual use case is when I'm connecting to a "big node" and I would like the lines to be vertical.

I can cheat by placing a coordinate behind the big node, drawing a line to the coordinate instead, and then drawing the big node so that it covers things up. However this won't work if I need to put an arrow on the end.

I could try to calculate the intercept coordinate on the edge of the big node manually, but that seems against the TikZ spirit. 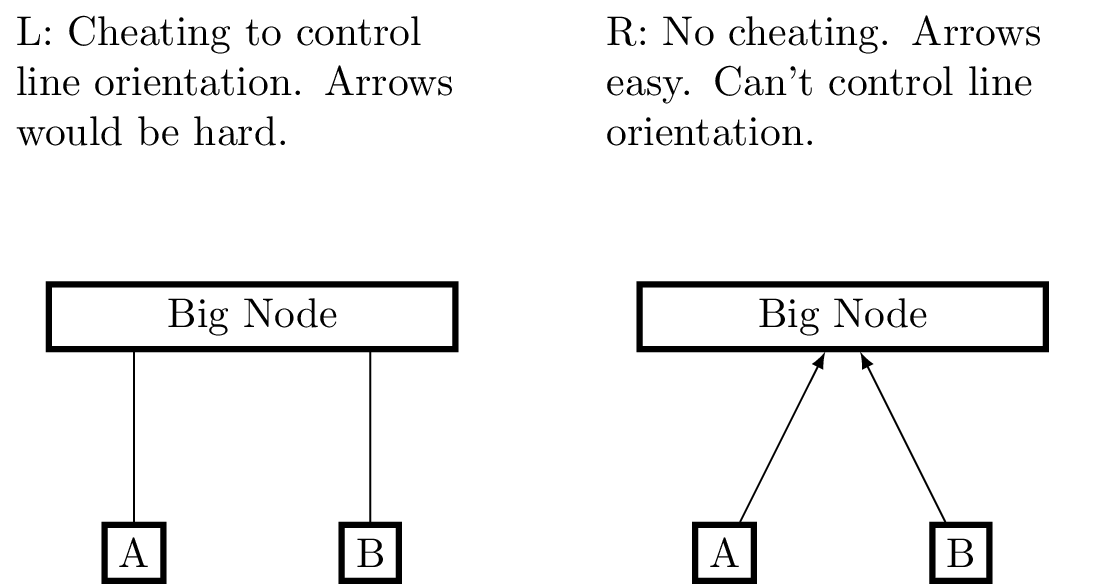 The left side of this example shows what I want to be able to do, except I want to do it without cheating, and I'd like to put arrows on the end of the lines.

May be I missunderstood something but I don't see any problem with |- syntax. Using Jake's code:

In case someone needs it, this syntax is explained in pgfmanual section "13.3.1 Intersections of Perpendicular Lines".

Jake and Ignasi's answers are excellent for the example I gave, of wanting strictly vertical lines between nodes. I found a way of doing the same thing with arbitrary orientation of the line. The "intersection of" TikZ mechanism can be used to find the intersection of lines defined by nodes or coordinates. The "intersection" syntax is tricky; it seems that you can't use the "calc" syntax inside an "intersection" specification, so you have to create a new coordinate and do the calculations there. 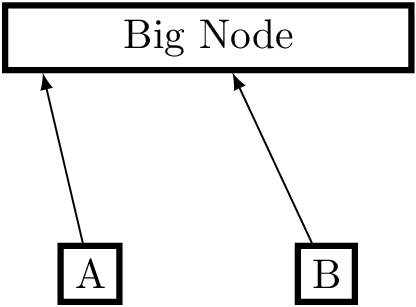 5
Creating a (tensor) network using TikZ
0
Vertical connector between left (west) aligned boxes
4
Matrices and TikZ : arrows inside the matrix
3
Strange error with tikz arrows
2
Different approach?
1
How do I store the x or y value of a named node in tikz \draw?

21
How to define the default vertical distance between nodes?
4
Differences between paths drawn between nodes and coordinates in tikz
2
Tikz: Lining up input and output nodes in multiple input multiple output diagram
9
Line up nested tikz enviroments or how to get rid of them
3
How to draw a square and its diagonals with arrows?
3
Arrow between BTrees
1
How do I change the radius of circle in a node in tikz style?
3
Document header with tikz
1
How to draw curved line in tikz connecting north and south side of a node?