I'm looking for a kind of extended draft mode which places the source code position of paragraphs, sectioning commands and figures etc. as marginpars or similar in the PDF, so that they appear on a print-out.

I often give my paper drafts or (parts of) my thesis as PDFs to my coauthors/contributors and/or supervisors, respectively. They usually print it out and make corrections and remarks on paper. We tend to meet and I bring a Netbook (small Laptop) with me so that I can make the changes directly to the LaTeX code while we discus them.

The issue is that they make statements like "on the Xth line in the Yth paragraph on page Z it should be foo not bar" or "Figure X should be bigger". Now I have trouble converting that to the location in the LaTeX source code. I think I could use SyncTeX and have the PDF open, then click on the position they mention to get to the source (I never used it so far), but this doesn't work in this case anyway because normally I already made several changes on the source file since they printed the PDF out! Editing should be quickly and easily possible, so I can't start handling two different versions of source code and PDFs etc. At the moment I simply search for parts of the original text they mention, but this doesn't work all the time because this text might not be fully verbatim like that in the source file due to line breaks etc.

I know about packages which do display labels so this should be easily done but the rest needs some custom code I think.

The basic functionality of adding input line numbers to the start of each paragraph can be achieved like so:

Which I shamelessly stole from TH's answer to a related question. On that question, people were saying that hooking into the paragraph like this is not a great idea because lots of unexpected things are built with paragraphs. So use at your own risk.

I guess it would be neat to add a "only put a line number every n paragraphs" option: that wouldn't be too much work, just a little counter and \ifnum magic...

I've started work on a package that builds on this answer. The github is here. It has a safemode option that doesn't do any paragraph hooking trickery so it should be safer. Instead it just patches particular environments and sectioning commands directly. This should be more robust if the above breaks. safemode currently doesn't work with titlesec because it looks like titlesec doesn't use \@startsection. (Or something weirder is happening...)

Using Martin Scharrer's own filehook and currfile packages, you can signpost where inputted files start and finish like so:

The \@reversemargintrue is just to make the notes appear on the opposite side (so that they don't overlap with line numbers). Same thing works for \include but you might want to handle that slightly differently just because of the forced pagebreaks. The package I'm working on allows you to put the current file name in the header and/or footer as well.

As mentioned in another answer, the showkeys package can deal with the last two points.

Finally, adding the file name of included graphics. The following seems to work in my not very thorough testing. I don't know if this is at all the appropriate way to do it: I just searched graphics.sty for draft and bodged from there.

I hope to have a version of the package on CTAN in a couple of weeks once I've done a little more testing, written some proper documentation and learned about .dtx files.

Do you know the showkeys package, which provides solutions for your last two points? 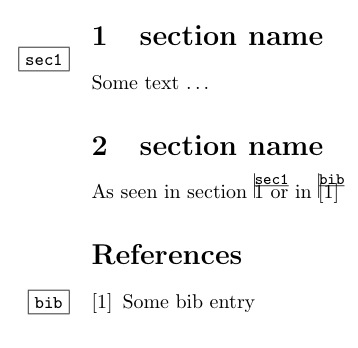 For your first point, I recently (as in this evening) wrote a very small package doing just that (with a little help from marginnote and everyhook). It's called srcline and is available from Bitbucket. Unfortunately it doesn't typeset numbers inside floats or lists yet, as that seems to mess up the document layout quite a bit, but it may be a good starting point.

Edit: I just realized that this is extremely similar to the solution/package proposed by Seamus.

Not the answer you're looking for? Browse other questions tagged sectioning floats cross-referencing citing draft or ask your own question.

3
Source code line numbers in PDF
50
Automatically assign a number to every paragraph
6
Reference line in document's own source code
5
Hooking into the header/footer mechanism
3
Why does a negative after skip in \@startsection go weird if you fiddle with the everypar hook?
3
Easiest way to reorganize complex .tex document that inputs / includes multiple tex files
2
display/print input filename at top of each page in draft mode

25
Draft mode for pgfplots
4
Biblatex: footcite of inbook items uses book title instead of chapter name
10
Cleveref reference name depending on label instead of counter?
4
How to hide subcaptions but retain subref labels?
2
display/print input filename at top of each page in draft mode
1
Cite source but display custom phrase in citation call-out
2
Double colon in prettyref label