How can I create a list as a variable that can be appended and eventually typeset?

How can I do something similar in LaTeX?

This question is part of a trail of questions. The goal mine was to use this list inside of a tikz node, but I removed that from this question in the interest of keeping it simple. So, for those interested, here is a quick list for reference:

For making a macro that can handle post-parsing-inputted list items, see:

For that same solution with tikz node support, see:

I have a list of inputted languages (see my other question). I would like to capture each language code into a list that I can print to paper as an inline list (i.e. da, de, en, etc.)

There are a few good answers already. Although the original question was answered, my problem was not solved due to some other things I did not originally think about. :( Maybe somebody can help me.

I have a custom \maketitle command where the mandatory input {} is the title of the document and the optional [] is the subtitle (list of ISO 639-1 language codes) My problem is that the \maketitle command is called before the file inputs are called, which means that at the time the language list is called, it is still empty. I need to find a way to loop the input commands one by one to grab the two-letter language codes (#1) and append them to my list.

Then I want to actually add the inputs after the \maketitle as shown in the sudo-code. Obviously, the inputted documents should appear after the cover page, but I need to parse the language codes before the maketitle page is called.

etoolbox provides a host of list managing tools. Here is one way using \listadd{<stuff>} that seems to match your requirements:

There are other ways to add list elements (pre-expanded, globally, etc.). The only requirement is that you define the elements contained in \languagelist before printing it via \printlist. That is, it doesn't work like the \label-\ref system where you can refer to future \labels.

A rather flexible list management can be obtained with expl3 and xparse.

The command \listprint receives an optional list of key-value pairs. Keys are

You can use action for any action you like, for example for inputting files. I created UserManual_de.tex, UserManual_en.tex and UserManual_de.tex with some mock text in them (just “This is the German|English|Danish manual”) and defined a suitable \inputlanguagefile action. 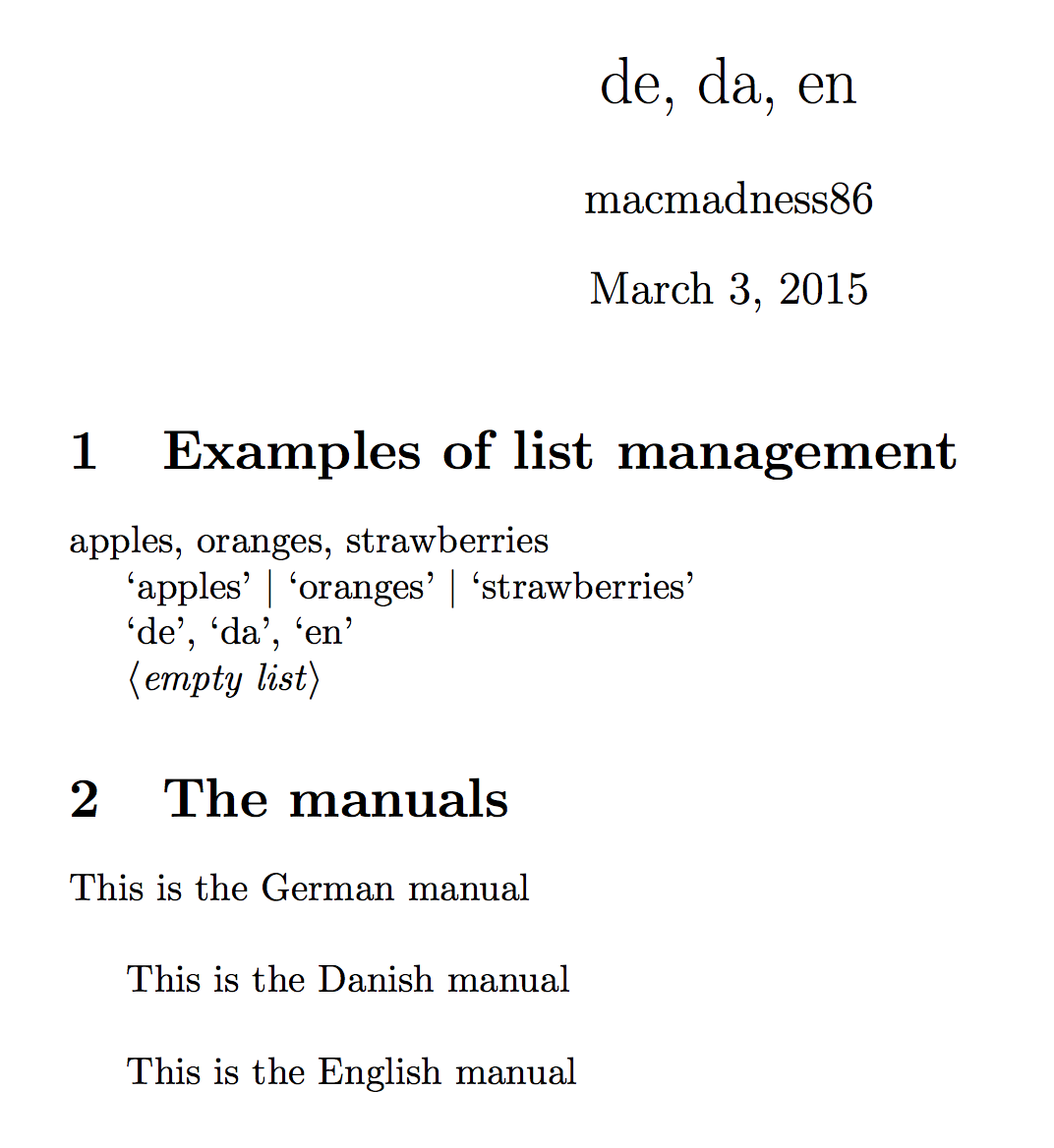 This uses the etoolbox package and adds some list elements in a row using \forcsvlist{\listadd{\myfruitlist}}{element1,element2,element3} etc.

The output/processing of lists can be done with (for example) \forlistloop and an element processing macro, \printfruitlist. There are other routines, see the documentation of etoolbox on this.

Not the answer you're looking for? Browse other questions tagged programming or ask your own question.

116
Cunning (La)TeX tricks
5
How can I use a list stored in aux and insert its output into a tikz node?
7
How can I iterate over a newline-delimited text file?
2
How can I loop thru a list of inputs that come after \maketitle, yet use that list as part of the \maketitle command?
3
Is there a way to limit the scope of the Table of Contents (\tableofcontents command)?
3
How can I apply actions to specific items or after specific items in a sequence in LaTeX3?

4
binary representation of an integer
21
Programming simple functions using TikZ arithmetic?
8
What are other programming languages with APIs for drawing graphs?
7
TikZ programming/macros, \list construct
4
Parsing and programming in TikZ
2
How can I loop thru a list of inputs that come after \maketitle, yet use that list as part of the \maketitle command?
5
How can I use a list stored in aux and insert its output into a tikz node?
4
How to make a list of environments?
1
Indirect control of behavior: how do I lengthen some pages and not others?