LaTeX style or macro for detailed response to referee report

Is there a suitable macro (or even style) for responses to referees and editor?

These often entails several points to that need to be addressed. It would be nice to, say, quote the original text (possibly numbered) and the show the response slightly indented, as in

a) Spell foo as bar

b) Include reference to Really, Important and Stuff (2010)

Section 2 has been updated and the discussion ...

Given the lack of pointers to anything pre-existing, I ended up with the following (and rather simplistic) solution, at least for now:

The \pointRaised macro takes two arguments. The first is the enumeration and/or location of the issue. This will be set bold. The remainder is the what I chose to quote from the issue raised. This will be set in slanted. The whole block is separated by some vertically space and a horizontal rule.

The \reply simply starts with a bold token followed by the comment.

For insert comments about the text modifications in a LaTeX file according to referee questions, a good and easy option could be make a version with the todonotes package activated. Small comments can be made at margin and big comments might be placed in line. For example: 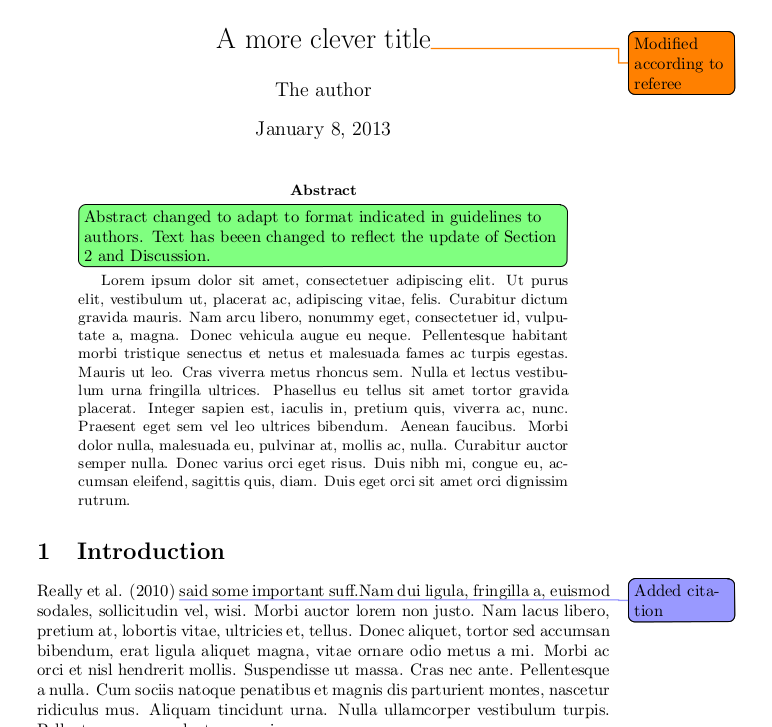 For a letter with questions & answers, this is essentially the same text structure of a exam, so you can use the exam document class. An example: 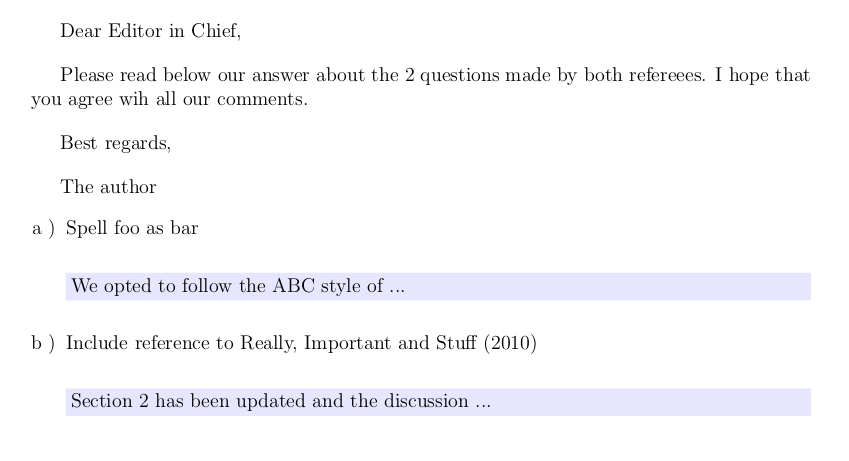 There is a new template for a beautiful authors response to reviewers, that is

Or alternatively, in Markdown:

I've modified this idea a bit, adding counters to automatically number the responses, and automatic referencing of where you've made relevant changes:

To use this, I've got the tex for the paper in, say, paper.tex, and the responses in responses.tex (just the document, no header commands), and in the header of paper.tex:

Just after the \begin{document}:

And down where I want the responses to appear in the document:

For instance, when I add some text or whatnot to address, say, Reviewer 2's third point, for example:

This is working great; the only unsatisfactory thing about it is that you can't reorder reviewer points or add/subtract any after you've started working or you mess up the whole numbering scheme. It seems preferable to making up unique keys for each point yourself or something. Any other ideas?

This will be a non-LaTeX. As Editor in Chief for a journal, I will add some thoughts based on experience. The lack of templates reflects the fact that there is no real need for such a template. A letter in rresponse to referees comments should probably be made so that it is clear that each comment has been responded to. Such a letter will then probably reflect the review format more than enything else.

I would argue that the most important aspect of such letters are clearly non-(La)TeX issues summarized by 1. clarity 2. sincerity 3. cordiality

As is stated by @dank normal structural features of (La)TeX is enough (technically) to make a successful response letter.

Just use itemize or enumerate. Put the suggestion (or, better, a one-line summary of it) in bold or italic at the start of each item.

Although it is useful to use latex or tex (in case there is mathematics involved), the formatting should not matter much to the editor or the reviewers, so long as things are clear. Don't waste time worrying about formatting.

Instead, spend your time documenting the changes to your document (or reasons for not changing). I normally quote line numbers in the revised version, so that reviewers can check quickly the changes that have been made, to see if they judge them sufficient. Few reviewers are going to read the whole text again, with the original one at its side, to see the changes.

The reviewers have done a lot of work for you, and few systems credit that work. (Deans and bosses of all kinds want to count beans, and providing careful reviews counts as, well, as a first approximation, zero beans.) You should give your reviewers a break, in the second round. Tell them what you've changed (and where in the text), and why you refuse to change other things. If you have some minimal formatting (even a blank line between items), that's sufficient.

I created this template if anybody needs it: https://sites.google.com/site/andreaballatore/misc

As I like the simplicity of Dirk Eddelbuettel's answer (petrelharp's solution was a bit too complex for my taste), but don't like keeping track of point numbers (I got a lot of comments from my reviewers), here's my take using a point counter and an environment to reset the counter for new reviewers.

Not the answer you're looking for? Browse other questions tagged templates or ask your own question.