assign penalty to one discretionary (not all paragraph)

For a quite complex problem that would be too long to describe, I need to set different penalties for different discretionaries in the same paragraphe. It doesn't seem to be possible with pdfTeX (and LuaTeX has a bug with it, but it's a different problem).

First I tried (these are all Plain TeX MWE):

but this doesn't break on the discretionary itself. Then I tried

which works under pdfTeX, but when I try

it doesn't work anymore (discretionaries penalty seem to all get the last one defined in the paragraph). Is there a way, in "normal" TeX or LuaTeX to do what I'm trying to achieve?

[Edit] As it doesn't seem possible, I've proposed patches for the LuaTeX binary on this thread.

[Re-edit] Feature request is reported here. After discussion with the team, it won't be done before TL2015, but will certainly appear aferwards.

Using the test release of luatex 0.85 I get from 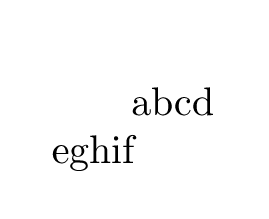 So, as egreg wrote earlier you cannot assign different penalties to different discretionaries within a paragraph.

Thus, the answer to your question is “no”.

“TeX looks at the parameters that affect line breaking only when it is breaking lines.”

By stating \penaltyp you are inserting a potential breakpoint with an assoctiated penalty p. If p ≤ -10000 TeX will always break at this breakpoint.

Thus, if you input abc\penalty-10001\discretionary{d}{e}{f}ghi to TeX, you force a break at the \penalty and while TeX is choosing the remaining breakpoints, the potential breakpoint you inserted by \discretionary{d}{e}{f} is (still) taken into account with a penalty of the value of \hyphenpenalty that was current at the end of the paragraph.

Not the answer you're looking for? Browse other questions tagged luatex tex-core hyphenation plain-tex discretionary or ask your own question.

14
Optional but encouraged line break + \hfill
19
Is there a way to apply different penalties to hyphenation points in a word?
8
Latin text not hyphenated at all with LuaLaTeX and polyglossia
7
Why hbox does not start a new paragraph?
1
Redefinition of \- (discretionary hyphen): does not apply to a minipage?
10
How not to hyphenate the last word of a paragraph
12
LuaLaTeX: Change kerning around "1" to simulate proportional figures
2
Retain original \- (discretionary hyphen) in all babel languages