Where does this space come from?

Using colored text inside a minipage results in less vertical space being appended after the text compared to normal text. Strangely, this only occurs when the minipage is top-aligned. In the other cases, the space is consistent.

Also, in both cases there is more space compared to text that isn't inside a minipage. 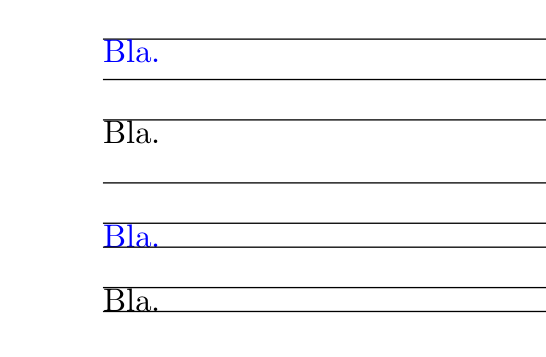 It's a case of the missing %, in this case after the \end{minipage} in the \maketitle definition.

In general, when there is a situation of unwanted space being introduced, the first place to look is always the missing %. See What is the use of percent signs (%) at the end of lines?.

I should note that a number of environments automatically remedy this issue by employing \ignorespaces at the end of their definition. So, in your case, the following definition would also work (note the absence of the %):

Here is the MWE which instead adds a %.

The accepted answer doesn't include the detailed explanation why the vertical space is here and why it is different in the colored and uncolored version and why the removing of horizontal space (using %) influences the visual vertical space. I try to explain this.

So, the \maketitle macro above starts the horizontal mode (see \noindent) and first "letter" of this mode is the \vtop (the minipage in LaTeX terminology). Then two following spaces are in OP's code. First one after \vtop (in macro, it was corrected by Steven using %) and second one after right brace from the souce line where \maketitle macro is used. After such two spaces the \hrule primitive is read. This primitive invokes \par, because it is read in horizontal mode. So we have:

The \par primitive does one \unskip, so we have

and this material is assembled to the paragraph. The first "letter" \vtop has the width equal to \hsize, so this "letter" fills the whole first line. The space is the break point and the second empty line is created (the Underfull hbox is reported in log file). But if only one space exists after \vtop in horizontal mode, then this space is removed by \par and the whole paragraph has only one line with \vtop as a "letter".

Summary: the paragraph has two lines if there are two spaces at its end. If only one (or none) space is here then only one line paragraph is created.

Not the answer you're looking for? Browse other questions tagged spacing minipage or ask your own question.

364
What is the use of percent signs (%) at the end of lines? (Why is my macro creating extra space?)