Clarification: The question may be related to the the quine fun question, but IMHO it is quite distinct.

The question here to write an "ouroboros" in TeX, i.e., a file that includes itself as a figure. In other words, the output should include in it a figure which presents the figure. In a sense, this is like a fractal, since the figure would show a the entire document, which hopefully is only one page. Now, in this figure, you would see a scaled down image of the output, which would have in it a figure.

In other words, the "ouroboros" is not a "quinn", but rather something like this image: 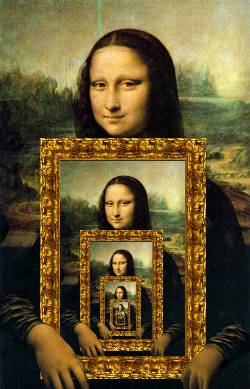 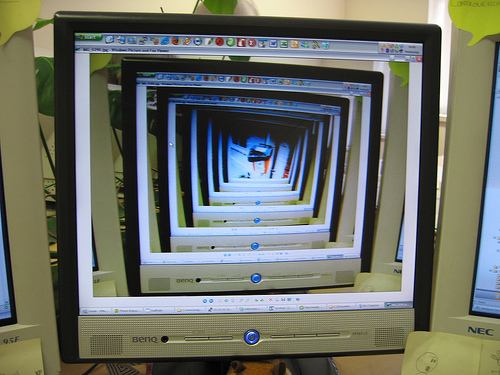 Here is my attempt to do that:

The idea is that in each run of the file through LaTeX, it would present an image, which is included as a figure in the next run.

This can be thought of as an amusing exercise, but a solution could be useful in writing documentation for TeX files; the idea being that you generate a LaTeX file, e.g, using bashful, compile it, and then include it as a figure.

The above solution cannot work, since the moment you run latex, the previous PDF file is erased. Perhaps a solution would be to have two files, each including the other. Another option is to copy the input into a temporary file, compile it, and then include it.

Another issue with the above is that pdfpags seems, at least for me, to be in conflict with the figure environment.

Note that the some of the answers to Self-replicating (La)TeX document do similar things, let the file include itself in some sense. Here, this should be done at the rendered level, rather than on textual basis.

... include a more sinister version... 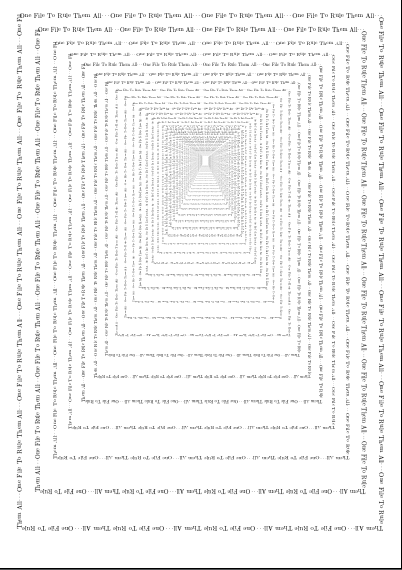 I'm not sure if this is what you want. Strictly speaking, this file does not include itself. It includes its own output. This is what your images suggest you want but your description is ambiguous.

Anyway, since you mention using this with bashful, I thought I might as well use bashful. This needs to be compiled with shell escape for obvious reasons. But, if you are using bashful, then you obviously have to compile in a way which bashful requires and will therefore be using shell escape anyway.

Here is a possible start: (code streamlined in edit)

The idea is to use the box model of TeX. In a \vbox we construct the page. Then the \vbox self-includes itself with a scale of .7 thanks to \scalebox of package \graphicx. The box includes an hyperref link, and all reduced copies up to the tiniest work. 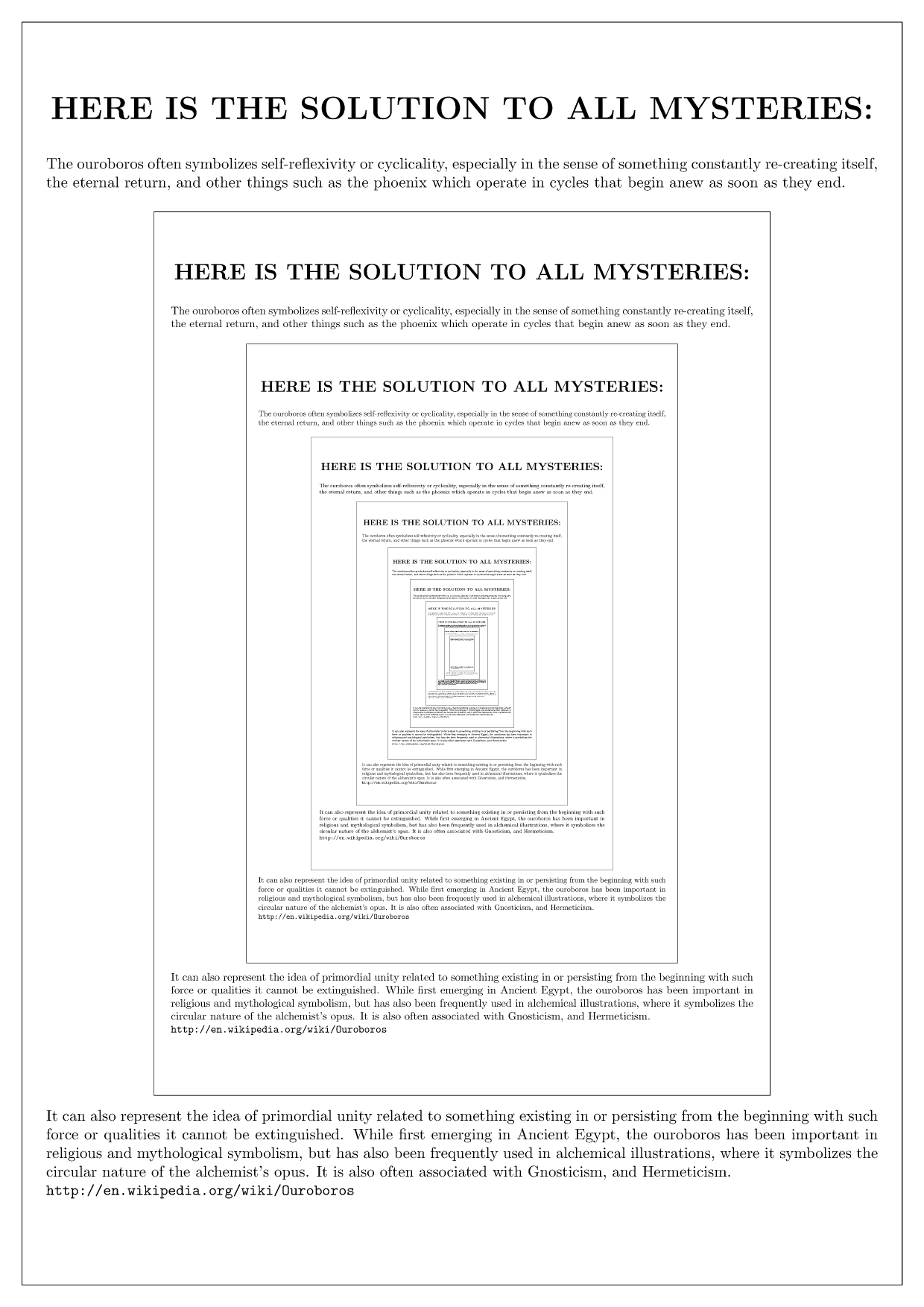 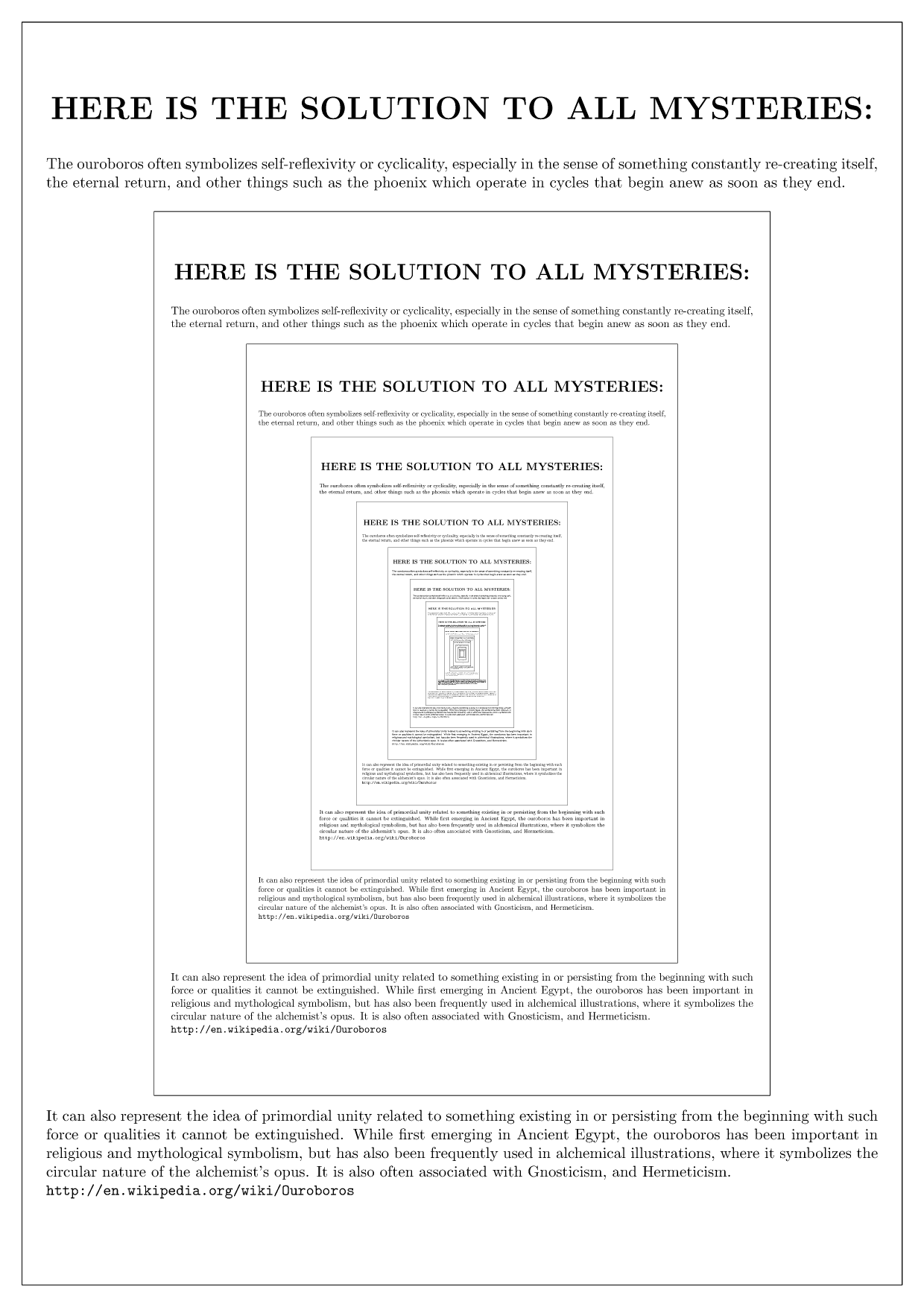 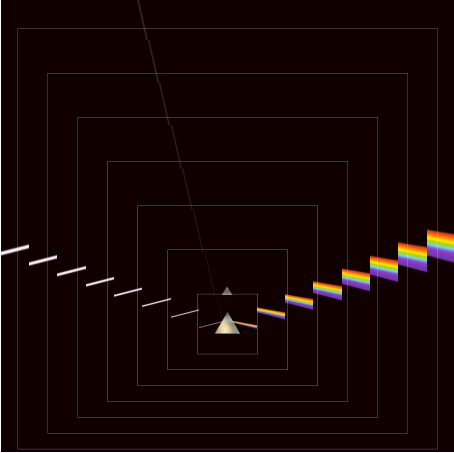 A bit out of topic, since it is a MetaPost example and it is not strictly speaking a picture including itself recursively but I could not resist to have a go at it, however clumsy, the visual effects being addictive!

I've borrowed the original heart-shaped picture's coding from the documentation of Stephan Hennig's wonderful texpath package, and slightly adapted it. 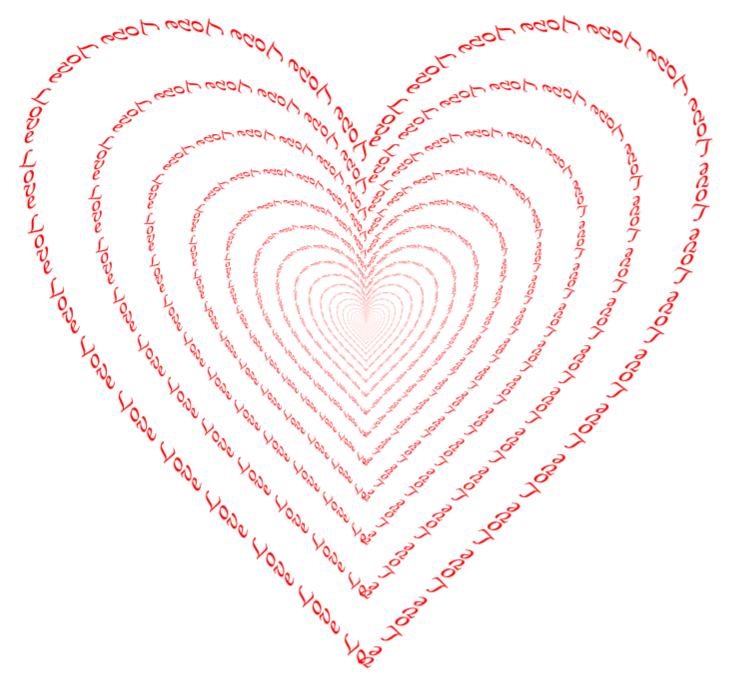 It occurred to me that all of the answers given so far – while in themselves valiant and skillful efforts – fail to fulfill a requirement clearly specified in the question's title: The document should include itself recursively ad infinitum.

There's an obvious problem with this: as soon as the document contains a single element, say the letter “x”, it has to contain infintely many “x”s. As a consequence, the document processing takes forever, it generates an infinitely large pdf file, and rendering this file would never finish.

I believe I have found a viable workaround for this problem: 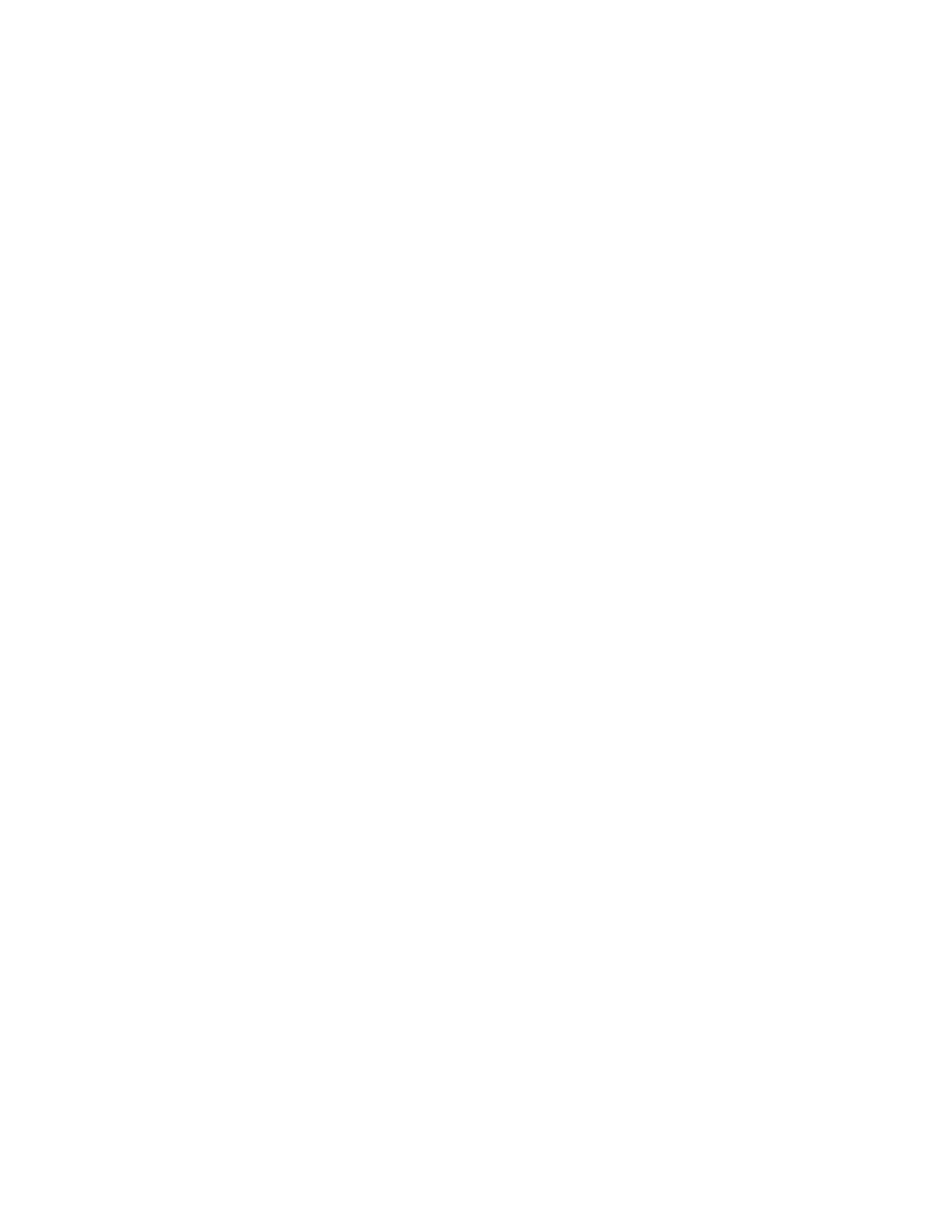 A critic may point out that my code actually includes nothing, which may seem to be in violation of the requirement for the document to “include itself”. However, since the document consists of nothing, including nothing is exactly the right thing to do.

Not the answer you're looking for? Browse other questions tagged graphics pdfpages fun recursion bashful or ask your own question.

45
How to avoid showing the filename when using graphicx?
76
How to include a PDF image into a PDFLaTeX document
9
Two figures side by side with text wrapping
3
Weird image filenames
1
using LaTeX pdfpages and geometry packages together
5
Coffee (and wine (and nicotine)) stains on an entire document
1
Maintaining figure quality when adjusting figure width