I just searched for a way of allowing pagebreaks when using shaded theorem-environments from thmtools. I found my question was, somewhat, answered here (the second solution) with a comment from the package's author Ulrich Schwarz. However, I'd like to keep defining theorem-like environments as follows

i.e. without having to declare an extra (rather bulky) theoremstyle for each environment I define.
Is it possible to use the "preheadhook-postfoothook-trick" with mdframed globally, while retaining the overall interface and style I would get with my above \declaretheorem-example?

As I understand, shaded theorem-environments in thmtools are already implemented using mdframed anyway, so I thought it should be possible to allow pagebreaks by redefining some internal thmtools command, by setting some global option, or something along those lines.

I hope this is actually a valid question, as it was, more or less, already answered in 2011.

to the theorem declaration. This will allow page breaks in the defintion and gives output as in the sample below.

If the options you want to pass to mdframed are more complicated, you can set-up a style

to the declaration instead of the shaded option. 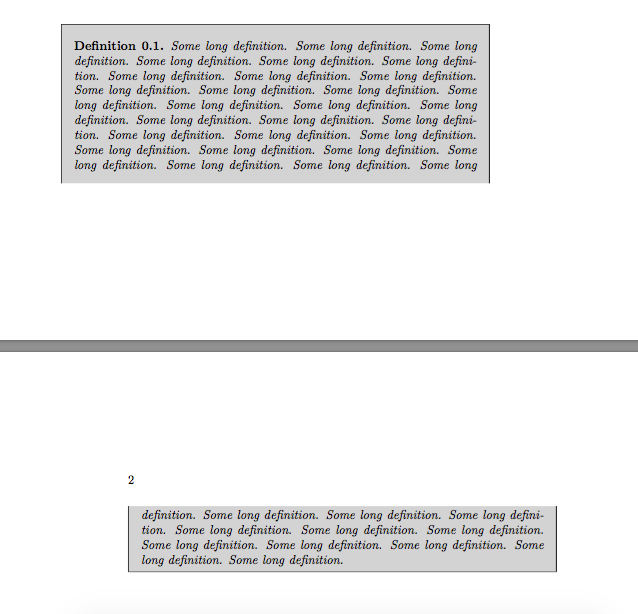 Not the answer you're looking for? Browse other questions tagged page-breaking theorems amsthm thmtools or ask your own question.