Use Markdown-style formatting for bold and italic

A MWE that implements the first one:

But how about the other two? There are questions about making two characters active, but using two characters both at the beginning and at the end of a command sounds more difficult. And don't get me started about three characters.

A side question: I have been wondering for some time: What is the difference between \catcode`*\active and \catcode`\*\active? (Note the \ in the second example.)

The nice thing here is that you can turn the feature on with \starON and turn it off with \starOFF (the default condition).

Here is the MWE.

The following solution uses LuaLaTeX's capabilities to define a function, called allstars, which converts instances of pairs of groups of asterisks -- ***...***, **...**, and *...* -- into "traditional" LaTeX code: {\bfseries\itshape ...}, {\bfseries ...}, and {\itshape ...}, respectively. The code assumes that asterisk-based markdown does not span linebreaks. The code does not make the * "active" (in the TeX sense of the word). Thus, various complications caused by * being active do not arise.

Using starred LaTeX macros (e.g., \section*) and starred LaTeX environments (e.g., equation*) is OK -- i.e., they will not crash the compilation -- if there are no other asterisks on the respective input lines. For extra generality, the code provides two macros -- named \markdownoff and \markdownon -- that turn the operation of the allstars function off and on. The allstars function is not activated by default -- it has to be turned on by executing \markdownon.

and no further asterisks anywhere else on the input line, the output will be "ab": a single "" character between "a" and "b", but no italic or bold characters. What's going on? The first six asterisks in ******* are interpreted by the allstars function as a pair of *** strings, and ******* therefore gets converted to {\bfseries\itshape}; they thus end up doing nothing at all, at least as far as TeX is concerned. The seventh asterisk, though, is not modified by the allstars function and therefore gets typeset by TeX.

Or, consider the string

which is equivalent (for our purposes) to

and that's what gets typeset by the (Lua)TeX engine.

Finally, consider what happens if and input line consists of

(and no further asterisks). The third pass of the allstars function finds a pair of single asterisks in this line of input and therefore converts it to

which is equivalent to

Thus, we get a numbered section, and the section header -- but not the section number -- is typeset in bold italics. Probably not what was expected, or intended... If you really need to typeset * directly, you should issue \markdownoff to suspend the operation of the allstars function. 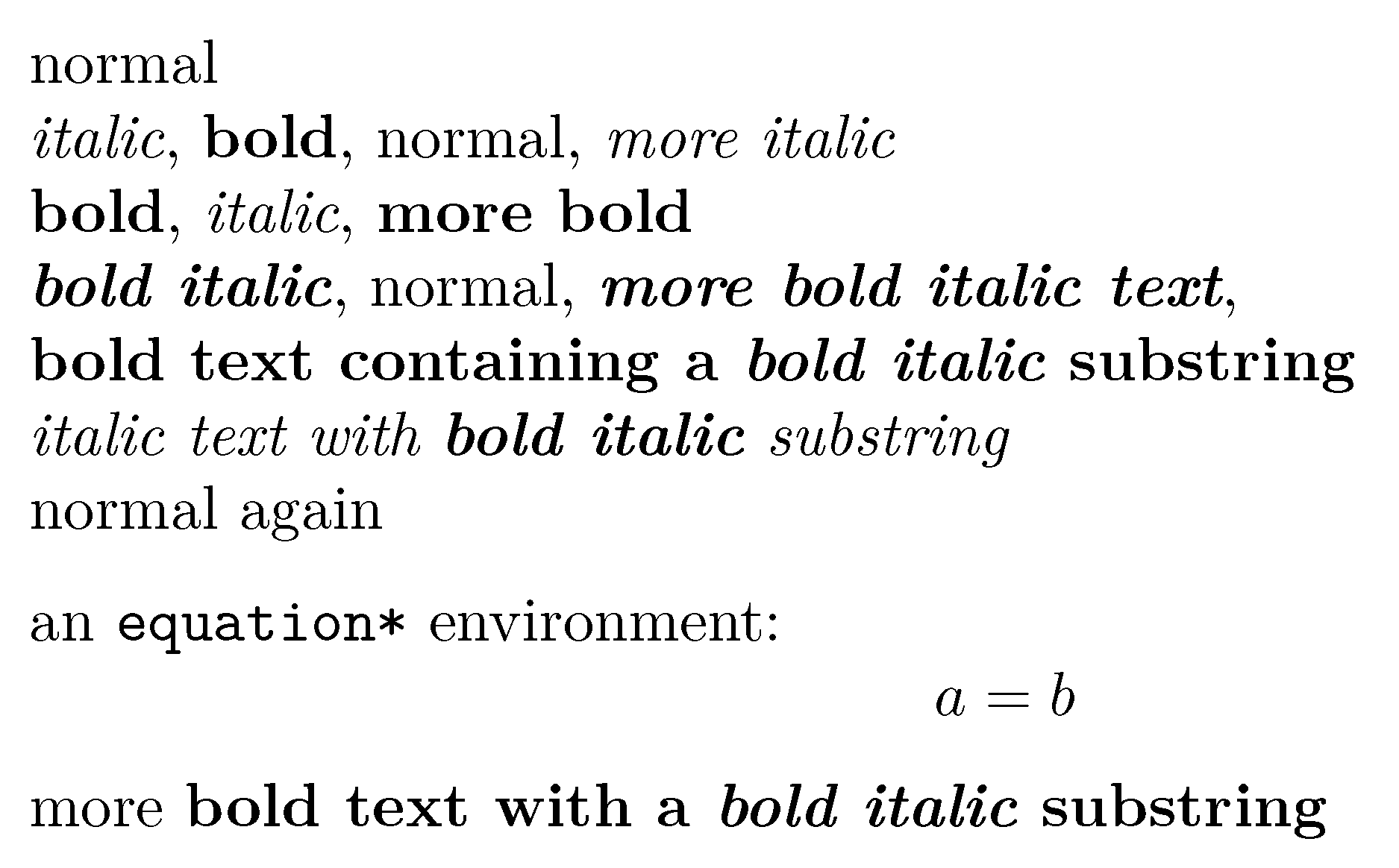 If you have not objection to use ' instead of *, then the wiki package is the easy solution.

This way there are not collision with starred macros. Moreover, it use the common Wikipedia syntax and on the other mand, the bolds and italics can be nested and even overlapped:

Not the answer you're looking for? Browse other questions tagged markdown active-characters or ask your own question.

111
Converting Markdown to LaTeX, in LaTeX
61
Will two-letter font style commands (\bf , \it , …) ever be resurrected in LaTeX?
17
How to use “`” in the same way it is used on the SE websites?
2
Latex Macro custom Name
4
What are use-cases for active characters?
8
HTML converter possible as a TeX package?
5
Filtering through an external command in LaTeX?
3
How can I make blockquotes in LaTeX, like Markdown
3
What's the state of the art re really-simple-markup languages and TeX

8
Labeling links, Markdown style
14
LaTeX class for creating markdown style output
7
Active characters in linguistics
10
Automating extraction of Markdown-formatted tables from an (incomplete) LaTeX document
3
markdown's bold and italic stop working after including babel package
10
align, aligned and R Markdown
25
Markdown vs latex for thesis
0
I use markdown and pandoc and need to renewcommand iffalse/% with a couple tilde
1
After converting *.md to *.tex with pandoc, no bold and italic in pdf file