How to get intersection points of a self intersecting path?

There is only one solution, point 1. It would require some programming, but it can be done.

But how to solve the case of the Bézier curves? Let me demonstrate it on the next example (picture on right). In this situation, we are getting many intersection points as curves lie on each other again, we could use those points (distance between them, if I'm not mistaken, is 1pt, to draw a lot of line segments. Maybe we could use window test, that's probably our best shot. In practice, I use a set of individual curves, which don't cross themselves, but isn't there a better approach how to get all intersection points of a single curve?

In the second example, there is only one solution: crossing is located nearby point 113.

A trick which seems to work here: searching the intersection of the curve… and its reverse. Applied with MetaPost.

The same idea seems to also work with TikZ:

I must admit that I was quite astonished to discover this question and that the accepted answer works. I need to look up the details of the algorithm to understand why!

Not knowing of this feature of the algorithm by which MetaPost and PGF find intersections, for the knots library then I implemented a method of finding self intersections that works by exploding a path into sub-paths and then finding the intersections between those.

On further analysis, I'm not going to replace my algorithm with the above because when I ran the code from the accepted answer and compared it with mine then there is a significant difference in the length of time it takes to compile.

Obviously, this is just one example.

It does something slightly different to what the question describes, but hopefully is enough to demonstrate the capability. What it does is to split the path at the points where it self-intersects. That is, if we imagine that the relevant part of the original path was just a straight line from (0,0) to (1,0) and the intersection point was at (.5,0) then the corresponding part of the new path looks like what you get from the path specification:

Once these splits are in place, there is the capability to extract the components of the path and work with them individually, including using them for specifying coordinates. In the above code this means that the intersection point gets used twice (once for each time the path goes through it) and the end of the path also gets marked, but these are simple enough to deal with.

There is one slight hiccough with the bézier curve in that it is specified as a single curve that self-intersects. I do have code to automatically split such a curve, but I appear not to have included that in the split at self intersections code - an oversight that I will remedy. In the meantime, we can introduce another path to split against to make the single bézier into two pieces to simulate this. 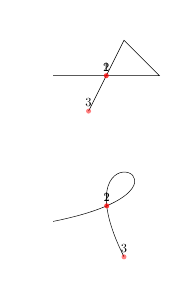 Not the answer you're looking for? Browse other questions tagged diagrams intersections or ask your own question.