What is the difference between split, multline, align, breqn for breaking an equation into multiple lines?

Sorry, if this question sounds a bit amateurish, but I haven't been able to find a good summary about the differences between these four environments for multi-lining an equation. Where do they differ and which one should I choose under different circumstances?

As noted in comments the amsmath and breqn documentation have several good examples, also the mathtools package has extended versions of several of the amsmath alignments. But the usual style here is to answer inline rather than refer to manuals, so this is a document giving the basic usage of the environments you mention. 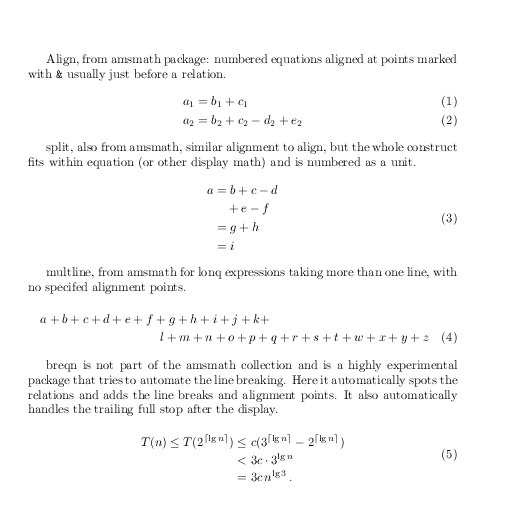 Not the answer you're looking for? Browse other questions tagged math-mode equations align breqn multline or ask your own question.

3
Arrange Equations
1
equation: Write equal sign below each other
1
I am not sure why this is not lining up? My errors say "Missing } inserted?" Not really sure where this is occuring
0
Macro for the align environment
0
newline with `\\` does not work
0
how can I import package for multiline equation in codemirror
1
line breaking has no effect in doublespace
0
spacing around equality sign with {split}, {align}