Table of contents of algorithm and algorithm2e together

to be changed to this:

Alignment and numbering were changed above.

Here is the minimal example, based on this question: 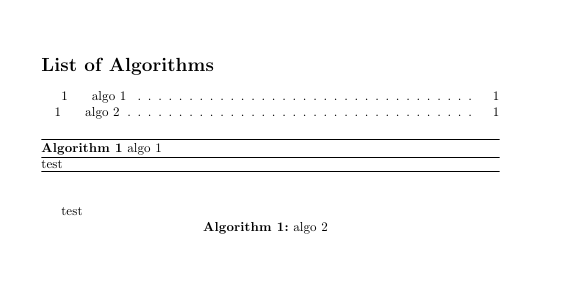 I had my thesis ready. However, just last night we submitted a paper based on it. I must submit my thesis too and I would like to include some of the algorithms written to the paper into the thesis. For several reasons, I have come into a situation where someone will give a solution to my problem, or I will just leave the the thesis without the paper-algorithms, which of course lead to a heartbroken thesis. :)

A quick solution is to use \setcounter inside each algorithm. Moreover, to get the algorithms aligned in the list of algorithms you need to redefine \listof and \l@algocf commands and set \@dottedtocline with the desired horizontal spacing. Here is the code:

Not the answer you're looking for? Browse other questions tagged table-of-contents algorithms algorithm2e algorithmic or ask your own question.