Is it possible in Latex to convert all numbers between imperial and metric?

This question led to a new package:
smartunits

I am currently writing a document that I would like to deploy to both European and American audiences. The problem is, as usual, the choice between imperial vs metric units.

The text is not scientific, and not meant for a scientific audience, so I cannot simply use metric units all the way through and call it a day. Since many of the units are buried in the text, finding them all and changing them is quite cumbersome (even with the use of hidden comments as guiding flags).

What I am looking for is a method to offer the best out of both worlds. I am looking for something that can convert all metric units into imperial and vice versa. The ideal scheme would look like this:

Which should hopefully result in:

The idea behind it would be that the units can be controlled from the preamble, without having to alter the text.

Is there such a package available, or is it easily possible to create my own solution (I'm not that great at coding, and have never even tried writing anything in Tex before)?

I took a look at the siunitx package, but there is nothing in there about converting units back and forth.

Edit: As per Joseph Wright's comment, a few more details: The units to convert would, at the minimum, be for weight, length, and time (with the last one optional, but advantageous). The conversion should be from standard metric (kilograms, meters, 24:00 format) to imperial (pounds, feet, 12 AM/PM format).

If I personally were writing a package, I would probably allow for certain command flags (e.g.: kilometer should translate to miles, not to thousands of feet), and body height (say 189 cm) should convert to 6'2'', not to "2 yards".

I realize that getting this right for every possible scenario (body height, mountain height, small distance, large distance, etc. etc.) is somewhat complex (mostly thanks to the weird parts of the imperial system). As to accuracy: Since it is not written for a scientific audience, any rounding up to the decimal point is fine. I.e.: 1 meter can easily convert into 3 feet, even if it is not really exact. Of course, if more accuracy were needed, a roundoff-point would be necessary.

Second edit: A simple hack that I think might also work (even if it's not really elegant), is a way in latex to define two words. For instance:

With some possibility of choosing which one gets selected in the preamble. This would force the user to convert everything by himself, but it would allow easy swapping between units, at least.

Implementing your hack is quite easy:

Then you can simply use \MyUnit{191cm}{6'3''} in your document and change between metric and imperial at any point using \Metrictrue and \Metricfalse.

Here's a full example (with a crude use of SIunits as requested in the comments):

When I first wrote this post I said that it ought to be possible to do this properly using pgfkeys. Partly as a proof-of-concept, and partly as an exercise to learn how to use pgfkeys, there is now a smartunits package for converting between metric and Imperial units.

and here is the output this produces:

(There is some trickery using the listings package to have LateX typeset the commands after the %'s on each line.)

For the sake of completeness, one option is to just do the unit conversions in LaTeX, using something like pgf/tikz or fp. I am personally of the opinion that this isn't an ideal solution, since there are a lot of edge cases (like, for instance, when to convert between meters and kilometers, or how much to round). It may be sufficient for a nonscientific use, though. With that caveat out of the way, here's a possible implementation.

First, we set up a flag to select between metric and imperial units.

We can then start by implementing a macro which switches between 24 hour time and 12 hour time, depending on the state of this flag. We'll assume that we input a time in 24 hour form, and convert it to 12 hour time if necessary.

Basically, what this does is check if the first argument (the hours) is greater than 12. If it is, then it uses the fp package's \FPeval to subtract 12 from the number of hours. The time is then that new number of hours, followed by the minutes and PM. Otherwise, we just add an AM to the end of the time. This should actually completely work for your needs.

Next, let's do conversion between two units, say kilograms and pounds.

Again we just do the math using \FPeval and use our flag to switch between metric and imperial units.

Converting between meters and feet plus inches is a little bit more involved, but not fundamentally different from how we did kilograms to pounds.

If you are working with kilometers as well, it might make sense to define something like this:

What this does is it multiplies whatever number you give it by 1000 and puts that into the \smartmeter macro. It uses the name of the macro (\smartmeter vs \smartkilometer) to keep track of units.

With those macros defined, the following code: 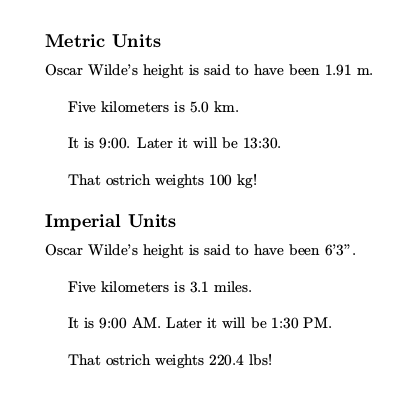 Not the answer you're looking for? Browse other questions tagged units or ask your own question.

1
Typesetting Imperial units
3
Can one use the Potrzebie unit system in (La)TeX?

48
What package should I use to typeset units?
14
Conventions for formatting scientific units?
6
Unit-free ratios in \path let
71
What are the possible dimensions / sizes / units LaTeX understands?
13
Typesetting unit-less numbers and number-less units
21
How to typeset imperial/US customary units, especially in combination with SI/metric units
10
Oldstyle numerals or lining numerals with units of measurement?
25
How much space between number and unit?
3
No newline before scientific units without using “~”
7
Column Alignment for SI Error Range