I would like to create a document with the appearance of amsart, but with added \chapter command (styled as in amsbook, or differently). How can I do that?

I tried to make LaTeX load both amsbook and amsart by various combinations of \LoadClass and \documentclass, but it seems to be a failing strategy since they both define a lot of things using \newcommand, causing an infinity of errors. I also realized I can't do it the other way around since I want to stick to the look of theorems as in amsart and not in amsbook. I also know that I can, in theory, style it myself using titlesec, but it would be a lot of manual work to get the spacing of amsart's titles, and I would like to avoid doing that manually.

A MWE is the following:

I'd change the parts of amsbook.cls that are not of your liking. Adding just the infrastructure for chapters requires much more lines of code than those added by David Carlisle, because also the table of contents and the other listings should be taken into account. 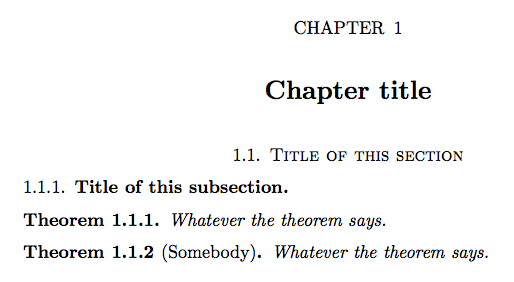 Here's what I get if I remove \chapter{Chapter title}, the customizations and load amsart instead.

Just copy the lines relating to \chapter from amsbook

Not the answer you're looking for? Browse other questions tagged sectioning chapters amsthm amsart amsbook or ask your own question.

5
How to edit \part of amsart class?

8
how to import images into Memoir chapter style
5
Equations in amsart crash into wrapfigs
2
Sectioning and Chaptering in AMSart not working at all w/example
3
AMSART: Change subsection headings from boldface to smallcaps
1
how to import images into Memoir Thatcher chapter style
1
How to [import packages] or [define commands] into chapter files?
3
Theorem, big Paralist and Amsart
0
Reset numeration in sections/subsections in each chapter
1
Force Subsections Headings into Title Case (AMSart class)
0
Centering subsections in amsart