What is the meaning of \fussy, \sloppy, \emergencystretch, \tolerance, \hbadness?

There are many way to influence line breaking, and avoiding overfulls on long unbreakable pieces of text. I'm puzzled. We are told that using \sloppy document-wide is not good , that an alternative solution to \sloppy is \emergencystretch , that microtype package can help tune linebreaking etc.

Can someone explain the effect of all the enumerated commands?

As we can see, \sloppy helps avoiding overfulls, but not in extreme cases: 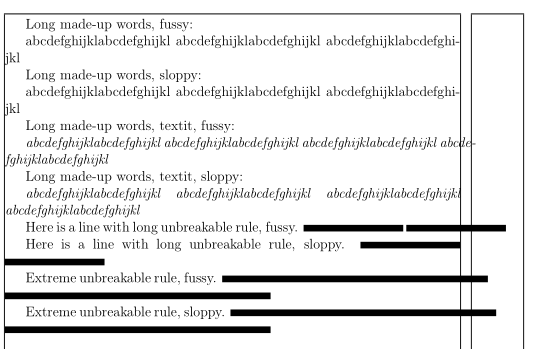 \sloppy is a latex macro that does

\fussy sets the values back to the latex defaults

\tolerance sets the maximum "badness" that tex is allowed to use while setting the paragraph, that is it inserts breakpoints allowing white space to stretch and penalties to be taken, so long as the badness keeps below this threshold. If it can not do that then you get overfull boxes. So different values produce different typeset result.

\emergencystretch (added at TeX3) is used if TeX can not set the paragraph below the \tolerance badness, but rather than make overfull boxes it tries an extra pass "pretending" that every line has an additional \emergencystretch of stretchable glue, this allows the overall badness to be kept below 1000 and stops TeX "giving up" and putting all stretch into one line. So \emergencystretch does not change the setting of "good" paragraphs, it only changes the setting of paragraphs that would have produced over-full boxes. Note that you get warnings about the real badness calculation from TeX even though it retries with \emergencystretch the extra stretch is used to control the typesetting but it is not considered as good for the purposes of logging.

\hfuzz does not affect the typesetting in any way but just stops TeX complaining if the box is is only slightly over-full.

\hbadness not used in \sloppy but used in the final example below` is similar, it does not affect the typesetting but stops TeX warning about underfull boxes if the badness is below the given amount.

The main problem with \sloppy is the setting of \tolerance to 9999 which is almost infinitely bad. That does not distribute the white space evenly but encourages individual lines of the paragraph to stretch the white space to arbitrarily large amounts. This was an acknowledged deficiency in TeX and why in TeX3 the new parameter \emergencystretch was added. Unfortunately when adding \emergencystretch to \sloppy when definining it for LaTeX2e, we didn't reduce the \tolerance setting, but left it at 9999, which is probably good for compatibility with LaTeX2.09, but bad for everything else.

Note final settings show that often you get a better setting with just setting \emergencystretch and not changing \tolerance at all, the setting is the same in both cases, but \hbadness=10000 silences the warnings. Not everyone would want the final setting without being warned about it, but in automatic typesetting contexts where changing the input is not a possibility and you never want over-full boxes, this is a possibility. 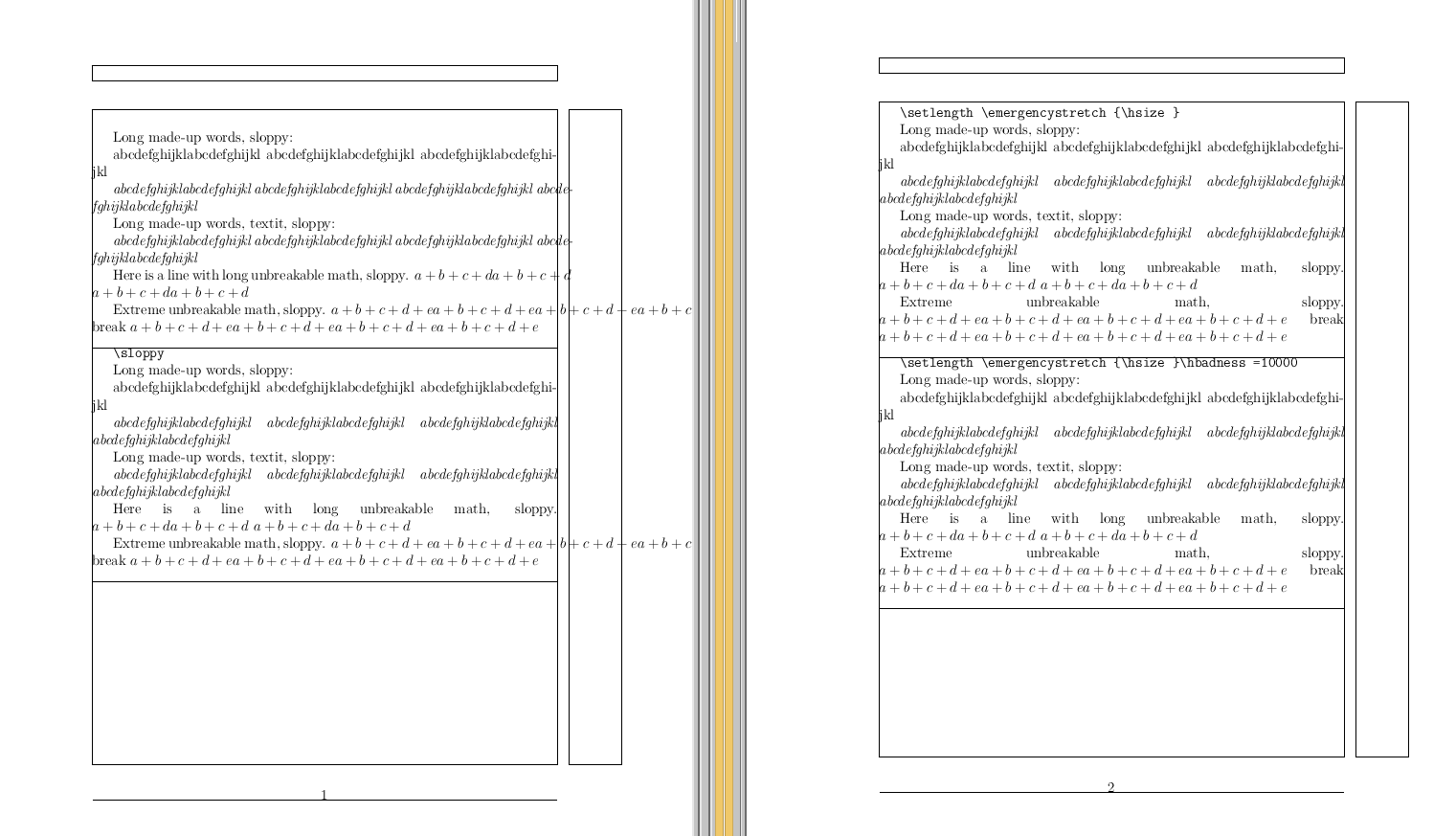 Not the answer you're looking for? Browse other questions tagged line-breaking microtype or ask your own question.

203
What does "overfull hbox" mean? (Why is there a black mark at the end of a line?)
76
How can I make my text never go over the right margin by always hyphenating or breaking on word-boundaries?
38
How to avoid using \sloppy document-wide to fix overfull \hbox problems?
30
What's the difference between \tolerance and \badness ?
8
Why is Latex giving this odd output?
7
How to adjust the breaking in the bibliography?
11
Why is my document not hyphenating on words starting with upper case letter? (I am not using \uchyph=0)
9
How to avoid \parskip being applied to \listoffigures etc.?
6
When line breaking goes wrong: does \hfuzz influence \emergencystretch
5
Automatic fallback from \fussy to \sloppy
See more linked questions

30
What's the difference between \tolerance and \badness ?
155
What is the difference between \newline and \\?
13
What are pdfTeX's exact rules for character protrusion? And for the expansions of \leftmarginkern/\rightmarginkern?
5
Automatic fallback from \fussy to \sloppy
8
What does \newline do to the line justification?
8
What is the ConTeXt equivalent of \sloppy?
12
What are the downsides of using XeTeX?