Why does \overline mess up the spacing?

Consider $a \triangleright b$ and $a \overline{\triangleright} b$. They behave completely different in terms of spacing:

The command \triangleright is a so called binary operator. LaTeX treats this binary operators in a way, that a small horizontal space is set before and after it. What happened here is that you have wrapped this command in some other command which does hide this feature. You can see the same effect if you just try $a+b{+}c$.

Therefore, you will have to make your construct a binary operator again by wrapping it in the command \mathbin:

What does this symbol mean? If you have some reference, you might recommend it to the unicode.

Each object in math typesetting has one of the classes: 0=Ord, 1=Op, 2=Bin, 3=Rel, 4=Open, 5=Close, 6=Punct. This class influences the horizontal spaces (automatically inserted between objects). The elementary objects in math typesetting are typically declared by \mathchardef primitive (for control sequences) or \mathcode (for native codes). The \mathode of a and b are declared as class Ord and triangleright is declared as

which means class=2=Bin, family=1, fontcode=2E. The most important (for now) is the class Bin. The sequence a\triangleright b is "Ord Bin Ord" and this influences the right horizontal spaces. The things are more complicated, but the basic principle is shown here.

Now, the most important is the fact that braces (like {\triangleright}) or other constructions (like \overline{\triangleright}) creates the composed object in the class Ord. So, we have Ord Ord Ord in our example and this inserts none spaces between. But there are class-retyping primitives \mathord, \mathop, \mathbin, \mathrel, \mathopen, \mathclose and \mathpunct which generates the object of given class. So

gives the sequence "Ord Bin Ord" and this influences the right spacing.

You can get the correct spacing using a modified version of \overline that uses the same infrastructure as \overset:

The instruction \binrel@ determines whether the argument is a binary operation or relation symbol and sets \binrel@@ to mean \mathbin or \mathrel accordingly; if the type cannot be determined, it is set to \mathord. 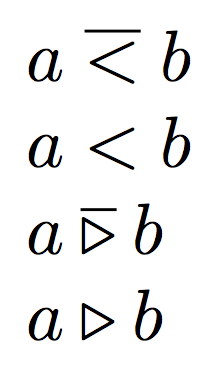 5
Why is the spacing changed through {}?
7
Why does putting a vspace*{0 mm} create vertical spacing?
2
Different behavior of setlength and settowidth
3
Why is the spacing different after a multiline array environment?
0
Minipages and spacing between \paragraph
5
`:` is set to `\colon`, but the spacing is still wrong
5
Non-combining \overline
2
Overline in operator messes spacing
1
\underline and \overline spacing problem in the definition of mathematical operators