Name tikz pic as if it was a node

However I don' understand why it is not possible to give a name to a pic like the one above if no coordinate is defined inside it. By default it would be great if it could behave like a normal node.

The underlying point is I'm working on a control blocs library (so that we can stop the chat below with @Alenanno). For example here is the definition of a math operator

There is a trick that can be used in some circumstances which exploits the fact that a pic is put inside a scope which can be named with the local bounding box key. Note that this will not work in trees or graphs.

It is also possible to use the name given to the pic by defining a "wrapper" key which explicitly adds a scope to the code:

The result is the same as before.

So, if you're doing something a node does well, and there is no particular reason for using pic, you're better off using a node. There is a workaround in the answer to the question "How to give a name to \pic", but it's exactly that, a workaround.

Now that I know what you need, here's a solution with Tikz. The newcommand \mySumn (you can rename it) takes two arguments like \mySumn{#1}{#2}, where #1 is the node's name, and #2 is the position.

I tried to add an optional argument using above of but didn't succeed. However you can do the same with this code but in a different way. Consider the following:

It will place a node p1 at the coordinates (0,0) and then it will place another node p2 at p1's north east +1em on the x and the y axis (diagonally above on the right).

Of course you can still draw edges from one node to the other.

Old question, but I was not happy with the local bounding box solution since I couldn't find a way to have a better control over it (distance to the inner content, for instance).

My solution was to use a nested picture in the pic, together with the remember picture option. The names are passed as arguments in a cascading fashion. With this, you can not only reference the pic as a node (because in fact it is a node) but also reference its contents.

Another point is that with this solution the content of a pic is always centralized, which was also that I was looking for when working on this code. 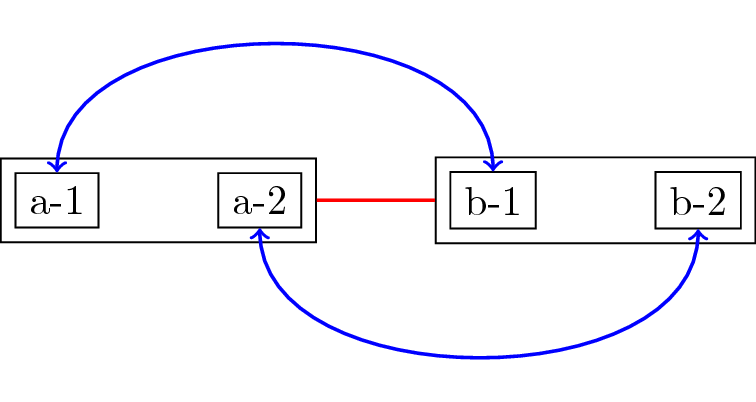 It appears that if I define a command like for my operator:

It is then possible to create a node that contains a fake pic, as what is above is exactly what one would use to define a pic.

0
Naming pic just like I can name nodes in tikz
21
How to give a name to \pic
11
How to position nodes around another node in TiKZ?
11
How to draw parallelepiped and cube with LaTeX
4
SCR (aka thyristor) symbol in TikZ circuit
4
pic mysteries continued
2
Tikz node with data storage flowchart symbol
0
Connect different newcommands made with tikz
0
How to access style values of a node
1
Border-to-border placement of a tikz-pic
See more linked questions

43
Creating thicker Tikz mindmap connectors
17
How to define the default vertical distance between nodes?
16
Numerical conditional within tikz keys?
6
TikZ/ERD: node (=Entity) label on the inside
41
How to draw points in TikZ?
15
TikZ: Drawing an arc from an intersection to an intersection
9
Line up nested tikz enviroments or how to get rid of them
5
Tikz image within a defined box (& the textpos package)
2
tikz tree use pic as tree node
1
assign a name for pic in tikz