Create an enumerate environment that can be turned off

This question led to a new package:
comment_io

I would like to create a document using enumerate environments that I then could switch on and off before compiling.

For example, let's say that I have a section that looks like this:

I would like a way for this specific enumerate environment to vanish so that the compiled output looked something like this:

In addition, I would like to be able to do this globally for different environments (that is, not having to edit each instance of the environment in question at the local level).

However, I would still want to be able to have other enumerate environments in my documents that stayed put (even if they were nested within the vanishing environment).

Context: I would like to write my texts using the Tractatus style of placing each section in a enumerated hierarchy. However, I would also like to be able to remove this enumeration and just show the text as a regular article. Finally, in this regular article, I would like to have the ability to show enumerated lists (that then wouldn't be a part of the Tractatus enumeration).

For allowing nested enumerate (or other lists) environments to still function, you need to capture \item if you're going to make it a no-op inside this new on-off enumerate. For this we store its definition in the preamble and resture it for use at the beginning of every enuemrate using etoolbox's \AtBeginEnvironment. If you plan on nesting other lists as well, you need to restore \item in a similar manner.

Below I've defined enumerate* which is turned off during compilation, while it still supports nested enumerates: 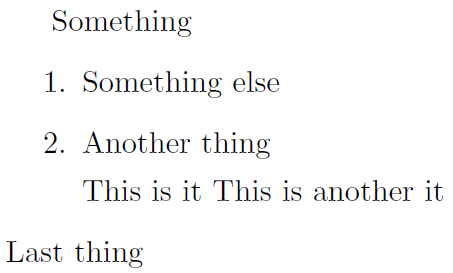 One can also adjust the vertical adjustment inserted by enumerate*.

Thank you for all your answers. However, in the end, after having pulled out all my hair from trying to get all the different methods to work, I simply resolved to writing my own script in Python which comments out (and uncomment) lines depending on certain commands that are included in the file.

So, for example, if my original file looks like this:

and I want the option to turn all these enumerate stuff off, I simply add a small command to the end of each line that I would like to be able to comment out, like so:

and let my script do its magic, which turns the file into something that looks like this:

This might seem cumbersome, but for me it's the absolut best solution since I know everything that's going on.

If anybody want to use or take a look at the program, which is written in Python, it can be found on CTAN.

Define a new env with enumitem acc. to your needs:

The original version of this answer was based on a combination of Werner's and Arash Esbati's answers. This version is derivatively based on them in virtue of being based on the original.

As given, this produces the following: 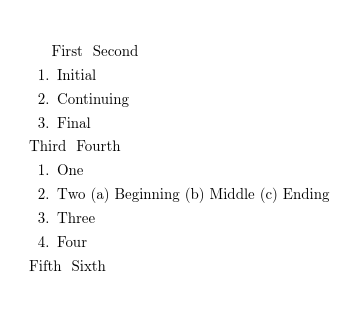 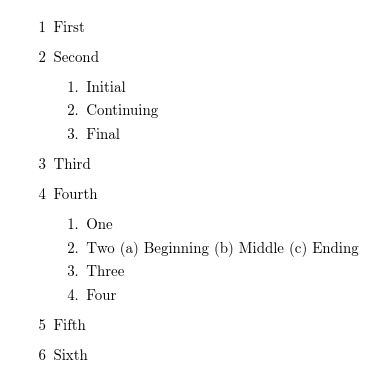 Note that to accommodate lists within the optenumerate environment, it is necessary to use unboxed mode when the toggle is set to false. This is what makes the nesting possible. However, it has some disadvantages. In particular, you will not be warned about things like missing \items. I would therefore recommend to always check that the code compiles with the toggle set to true since that will do more sanity-checking and help to ensure the consistency of output.

See page 9 of the manual for further details concerning the difference between boxed and unboxed modes.

This almost does the job in your use case. It may not be robust with fancier enumerate environments or options - it does not deal with nesting as you wish. 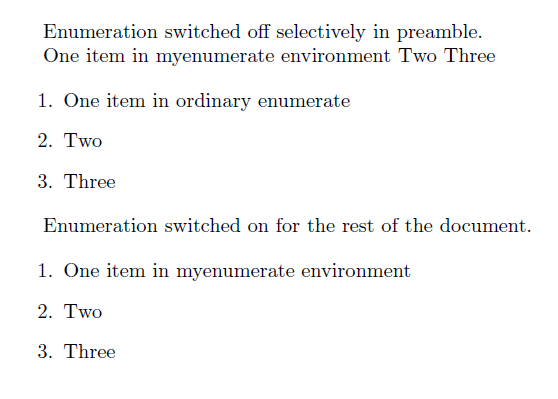 Not the answer you're looking for? Browse other questions tagged enumerate or ask your own question.