Why the floor and ceil math delimiters don't display?

If you are using ConTeXt standalone, you can update your distribution and these will work. The fix would also be part of TL2015.

In case you are wondering, why such this bug existed, ConTeXt has an experimental feature (motivated by MathML fences). For example, if you want the \lfloor ... \rfloor to appear in blue, you can use:

This only works with \left..\right and not \big etc. The above example gives 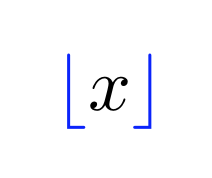 It is also possible to use this to define new fences (what LaTeX calls PairedDelimiters). For example,

Some of the delimiters were missing and as a side-effect, \big\lfloor was not working.

Not the answer you're looking for? Browse other questions tagged context bigdelim or ask your own question.