I got an example handout which was written for pdflatex but since I use lualatex i'm pretty sure that I have to make some changes to the preamble.

From there Frequently loaded packages: Differences between pdfLaTeX and XeLaTeX i already know that i have to change from

in the final output. I assume it happens because

only works when inputenc is loaded with utf-8? Everwhere else(besides that header part) there are no problems with those characters...

The other problem I am facing is that according to the link i have to replace amssymb with unicode-math but as soon as i do so the defined environments aren't found anymore... so i assume that any part of the definition of the theorems depends on amssymb...

My concrete question is now what exactly do i have to change when moving from inputenc to fontspec, from babel to polyglossia and from amssymb to unicode-math in order to achieve the same output?

There are things in your current document, that are valid in TeX or valid in LaTeX2.09, but obsolete in current LaTeX, LaTeX2e.

Following an example using current KOMA-script to set up the document. As this seems to be some kind of lecture notes, which are intended to have the same appearance, it is adviced to write a short wrapper class. 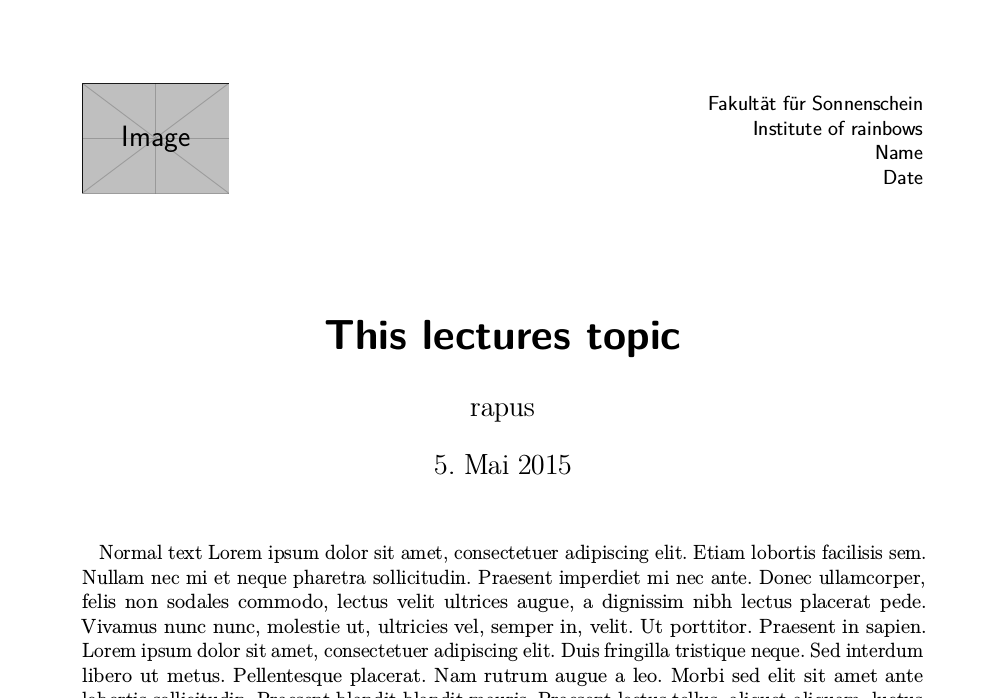 This is the header of the output, we can see that the author and the date would be printed twice. That can be dealt with in a wrapper class.

In the document that did not work with LuaLaTeX, old TeX-font commands have been used, whereas LuaTeX uses a completely different font handling system. The margins were set by hand. In the example below, (relatively narrow) margins are set using the capabilities of package typearea. If the need for specific margins exists, package geometry can be of help.

I left the theorem stuff mostly untouched, but changed the filename to the ending tex and used regular input to read the file.

Not the answer you're looking for? Browse other questions tagged luatex conversion preamble or ask your own question.

8
Can I amend the preamble from outside the preamble?
1
Print large macro block from Lua to TeX
3
Preamble works in .tex file but not in .sty file
3
Place preamble packages in a different tex file
3
Print TeX PDF page with lua
1
What preamble or packages do TeX StackExchange answers use?
1
Text from Preamble in LaTeX document
6
Passing arguments from TeX to a Lua function
2
TeX Conditional in Lua