Can someone help me improve upon this command?

I have been using his to fill space between raggedright and ragged left words. However I have begun to use in environments with small horizontal widths (which require line-wrapping) and it begins to break.

The following was created using: 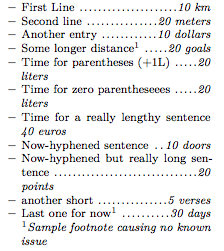 As you can see my standard use case is some text followed by \mydots followed by some italic text (but not always, I am looking to make this work under any situation). My difficulty is that I hope to improve this command without modifying its implementation, its part of my .cls and would require manual change of hundreds of files.

Essentially what I want to happen is that all the text following \mydots needs to be forced into one line, linebreaking the pre-\mydots text wherever needed such that at least some of the previous word falls onto the line with the dots. 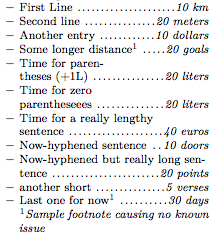 I think this could be accomplished by tricking latex into thinking all the text following \mydots is one word. But I'm not sure how to do this. 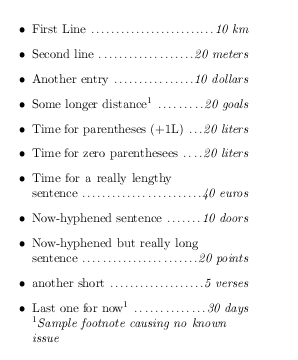 a bit of glue balancing....

Not the answer you're looking for? Browse other questions tagged spacing macros or ask your own question.