Table of Contents: Changing the formatting of specific Chapters (the Appendices)

Instead of my Appendix titles appearing in my Table of Contents formatted like the rest of my Chapters (I'm using the report class) I would prefer for them to appear in the same format as my Sections (see second image below). However, I can't just use \section for each Appendix, as I would like them to be treated as Chapters for all purposes other than the ToC.

My MWE (no additional packages specified):

This gives me a Table of Contents that looks like this, where each Appendix (as well as the additional line `Appendices') are formatted as Chapters: 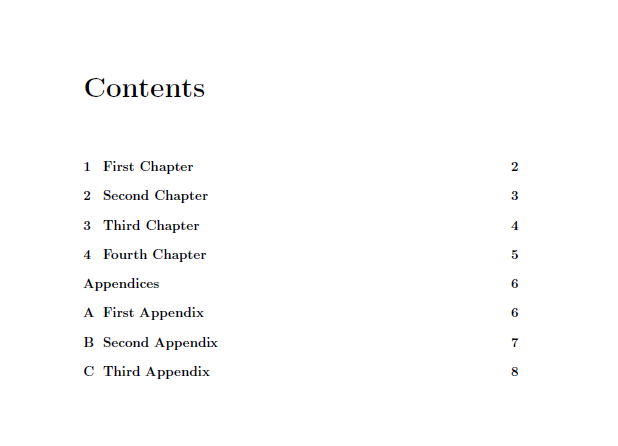 However, I would prefer for them to appear in the ToC formatted like Sections. I can produce this manually by editing the ToC file, changing (for example) the line:

Editing each Appendix line the same way gives me: 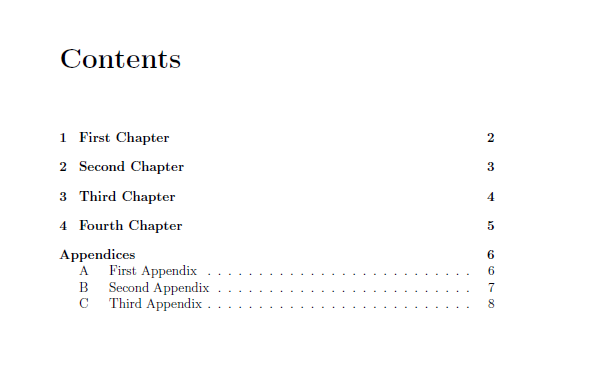 ...which is exactly how I want the finished thing to look.

Obviously manually editing the .toc file works, but isn't ideal (as it gets overwritten when I recompile) and, to be honest, the simplicity of the change makes me feel like there must be a way to do it cleanly and automatically. And I'd always prefer a 'proper' (elegant) solution. If anyone can help me to produce the same result 'properly', I would be very grateful.

N.B. I have found a few solutions to similar questions, but none of them quite cuts it:

Here is a solution with \let\l@chapter\l@section in .toc

This uses the direct write to .aux which produces a \@writefile{toc} in turn. (It's similar to the \addtocontents way touhami made)

The problem is, using this section stuff, that the appendix chapters appear as sections of chapter 4, which is probably not really wanted.

I think, it would be better to use \numberline for the appendix chapters too.

Not the answer you're looking for? Browse other questions tagged table-of-contents appendices or ask your own question.

2
problem with `hyperref` and TOC