Biblatex order of entries in a multi-citation

I am trying to understand how to change the order in which citations appear when I use multiple entries. Unfortunately the BibLatex documentation is not really helpful, its so complicated.

I presume it is sorting them alphabetically by default. How do I change this? I don't want to change the order in which they appear in the Bibliography, they're alphabetical and I want them that way. Its the in-citation ordering I want to change.

Is there a way to tell it not to sort them and put them in the order I put them when doing citations with multiple references?

See also Biblatex: how to automatically sort citation by year (sortcites=ynt) when references are sorted by name (sorting=nyt). 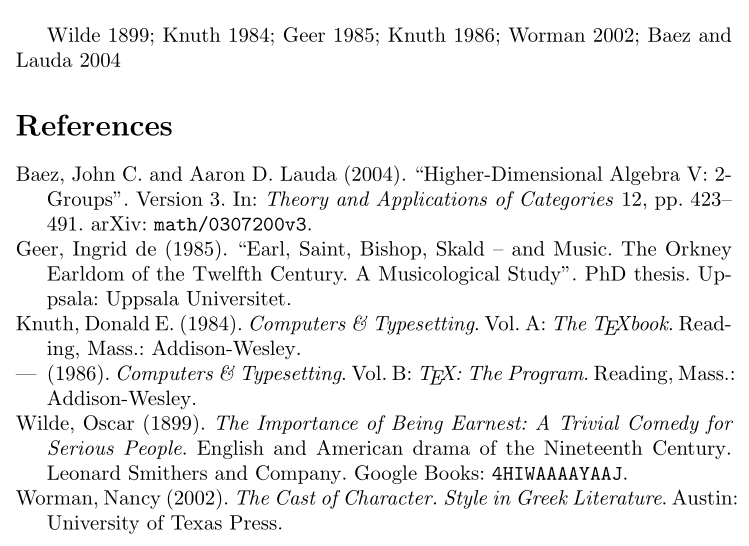 If you just want your multi-citations to appear in the order that you cite them, while keeping your bibliography sorted, you need to specify sortcites=false when you load biblatex.

I owe this to @UlrikeFischer's comment, but because I missed it on first read, I thought I would add it as an actual answer.

This is very simple, you just need to specify in the preamble:

121
Biblatex citation order
0
Superfullcite with style=alphabetic
2
Make sort order in citation call-outs independent of value of maxcitenames counter
12
BibLaTeX: Citation Sorting with Split Bibliographies and Filters
5
Multiple citations: citation order different to bibliography order
2
Sort citations according to year, while being "grouped" by authors
0
Order quote citations alphabetically with biber
4
Sort some, but not all, multiple citations with biblatex
0
biblatex gives incorrect sequencing by using all given name initials
1
Problem with in-text citations and the sorting of the bibliography after name and year (both not uniform)