I'm writing my thesis and I need to insert a lot of screenshots and diagrams (which I'm building outside of LaTeX and saving as PNG to insert into the document). However sometimes my PNG images, both in pdflatex or using the Adobe Reader, are kind of distorted even when using 100% zoom, they are only crystal clear for zooms bigger than that.

My question here is, when printing the pdf document, will they appear with clear lines? As in, the bigger the resolution I use the images the better, even if it implies not looking good on the screen PDF viewer? I'm not used to these matters so I'm sorry if it's an easy answer question. Thank you in advance.

If you decide to use .png files in your document, it's fine, you could print some test pages to see the result, but remember that along with .jpg, these are raster images.

This means that they have a fixed number of pixels and may (will) lose quality when changing resolution, such as zooming in. So you might want to use bigger resolutions, enough for fitting within the page width.

Alternatively, you might want to include vector images. This is not an easy question, since it all depends on the type of images you're including. But my suggestion is this: some might be recreated in Latex itself using Tikz and/or pgfplots, such as the diagrams. This would be the best solution because you will be able to include the outputs directly in your pdf, which will be lossless (pdf is vectorial as well).

To expand my point about Tikz vs included graphics, I added an example below to show the difference. I created with an S in it using Tikz.

Then I took a screenshot of it, and included it, and later I also exported the original output (pdf) as png and included it. Then magnified both of them thanks to the spy library.

As you can see, while the first one doesn't lose quality, they both look bad when magnified but the exported one looks worse even when not magnified.

Taking a screenshot of it 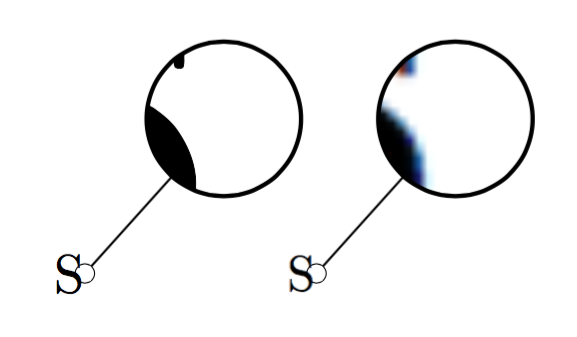 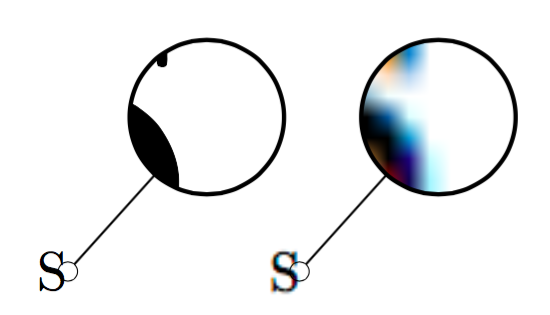 You should start by printing a test page with a few screenshots on it as they will appear in your final document. This will tell you if the images look good enough printed for your purposes.

In general, as long as you don't scale your screenshots, they should look just about as good as they can on paper. If you do need to scale a screenshot (e.g. shrink it so that it fits on the page), do this by changing the DPI of the image. A higher DPI will result in higher pixel density and a smaller image without sacrificing clarity.

For diagrams, if Tikz is too intimidating, you can export your diagrams to pdf or eps rather than png, avoiding the scaling problem. If you want tighter LaTeX integration (perhaps using the same fonts or even calling commands from within diagrams), then this question contains a wealth of figure-making GUIs.

Not the answer you're looking for? Browse other questions tagged pdf png or ask your own question.

142
What GUI applications are there to assist in generating graphics for TeX?

18
Attach displayed image to the PDF without storing it twice
6
Can zooming in PDFs recover original image size?
0
Embedded png-Images still result in small pdf-fielsize
9
Inserting PNG file as is
4
preserving pixel resolution when converting to PDF
4
PDF vs. PNG figure: why does figure load so much faster even if file sizes are the same?