If I want to list three constants a, b, c, it appears that both lines in the following MWE produce the same visual results, at least in the MWE itself and in all the experiments I have conducted:

However, is one more correct than the other? Can it cause issues to use the first one? I know that TeX is at least allowed to break the line at \, unlike in the case where I had just used a simple comma.

(I know I should probably insert a ~ before $c$, but I found that would distract attention from the real question here.)

Yes it matters. In the first case the comma is from the math font, and depending on your math setup can be different from the text font. So you should make sure that all commas are either from text or math and not mixed. Which one is better depends on the context, in a normal sentence I would use the text comma. 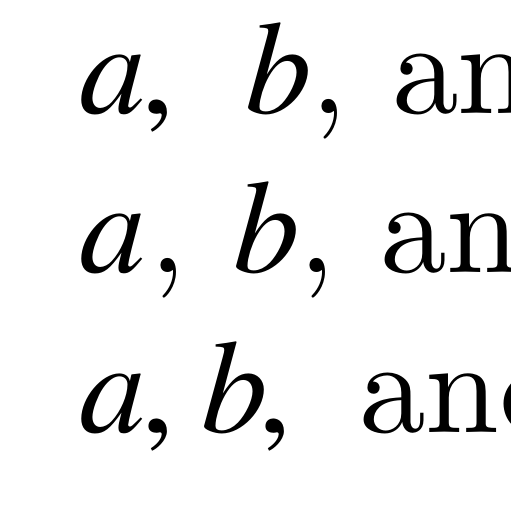 TeX will not break a line at the “control space”, because it's allowed to break lines in formulas only after binary operators such as + or =. Glue in math mode is not an allowed break point.

will be different, because TeX adds a thin space between a punctuation atom (the comma) and an ordinary atom (the ‘b’), independently of any explicit intervening glue (or penalty).

So the “correct” way should be

The three variables are just names, from a grammatical point of view, so this is no different from

Whether you should use the Oxford comma or not is up to your personal preference (I wouldn't).

Why no tie between Moe, and Larry, but one between $a$, and $b$? Because single variables in a text are much less prominent than a multiletter word, so it's better to help TeX in not letting it add a line break there.

I generally recommend to liberally use ~, so maybe

would be even better. If TeX is not able to correctly break the paragraph, we can decide whether to remove a tie.

What about “for i=1,2,...,n” (that I wrote in obviously wrong way here)? The list of numbers forms a syntactical unit, so it should be

Such a choice could be debatable, so I'll stop here.

Not the answer you're looking for? Browse other questions tagged math-mode punctuation or ask your own question.

94
Adequate hyphenation of words already containing a hyphen
27
How would one design a math font?
19
To Imply a Dash and not Minus Sign in Math Mode
7
'=' and '-' characters single quotation
5
macro that deletes whatever symbol follows after the code and leave no space
3
Knitr: siunitx clashes with OutDec = “,”
2
Typesetting an M-dash at either end of a source line without spaces around it
6
space between W (math-mode) and comma