I have this diagram I'm doing with xypic, and I want to make bent arrows going from the top to the bottom of the diagram. So I re-learn the syntax for bending around entries. THen I decide I want those arrows dotted. So I add the extra commands and end up with this:

I finally get to typeset and… WHAT? 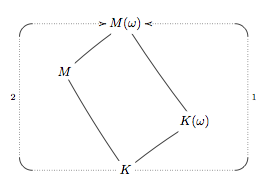 Why are those turns not dotted and is there a way to get them dotted like the rest of the arrow shaft?

I fear, this is not possible. Please see here dotted or colored arc in \xymatrix (not a great reference as I was the only to answer and did not score impressive points with that... :-) )

However, I recommend switching to tikz-cd here. Please see my MWE: 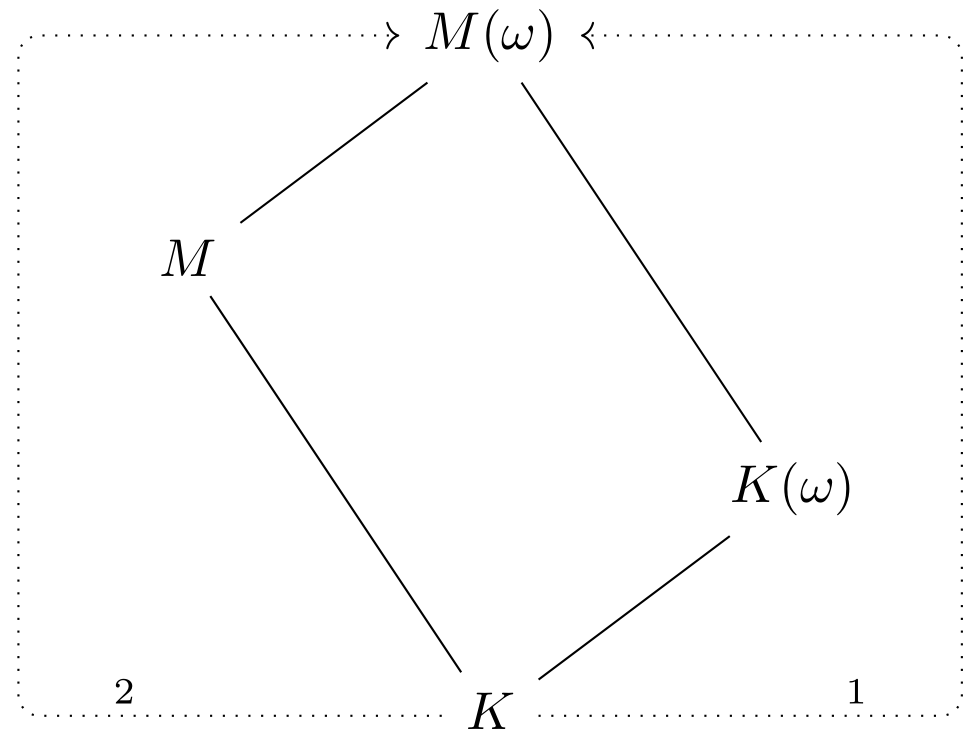 I was not able to set the labels onto the middle of the arrows (or had not enough time...). Please see the manual and other post on how to use \tikztonodes correctly. It could be that you will need to set two phantom nodes here.

An alternate solution sticking to xypic is the following: 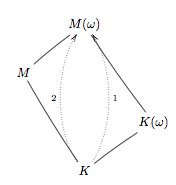 The look is rather different, but for this single diagram it will do fine. However, this is only a partial solution, since in other contexts I might want to tweak around with those curved arrows, and at present I have no idea how to do that, and the answerer here seems not to know either.

Another solution with xypic, as Kris told me by mail, is the following:

However, this only works from version 3.9 up, that is only with 3.9, since that is the latest version. Unfortunately, neither TL 2014 nor CTAN have that version, and they both have 3.8.9, which gives the following nasty result: 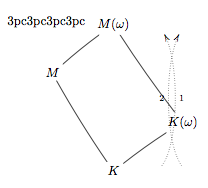 In Kris's own words:

The "3pc" are the width indicators for the curve that only 3.9 can handle - 3.8 just echoes them.

With the latest update newly downloaded from sourceforge, the result of this solution becomes: 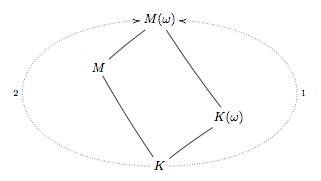 I will soon experiment with the lengths in the parentheses to see how much tweaking I can do with the loop. This is actually documented on page 42 here, uh-oh, no, that is the old documentation, but on page 42 of the newer one from sourceforge you find the same table as in the older one, but with the <dimen> possibility too, explained in 24p on page 43. Lots of tweaking can be done with this, as I have seen. I won't post examples because I don't know which of the many to choose, and they are too many :).

Source change -- still not known, will hear from Kris again :)

There seems to be a possible change in the source that would allow auto-dotting of bends. This is what Kristoffer Rose told me by mail, and I am going to try that. When I manage this, I will edit this answer to include that change. UPDATE Kris says:

To get involved in Xy-pic development you (1) checkout the source from SourceForge, (2) "make xysource.pdf", (3) study the "kernel" and "arrows" sections of the code (easiest in xysource.pdf). The fix will be to the place in the xyarrow.doc code where it currently uses a \cir primitive to do the turns, where you will want it to use a \crv primitive instead if that is loaded and the connection style is non-solid... (I was serious that this is a courageous enterprise)!

Now I have downloaded xy-pic from sourceforge, xysource.pdf is already present, but I looked through xyarrow.tex and found no \cir, only \CIR or \cir@… where … represents something I don't remember. The non-dotted bends are reported as a Bug in xysource. I couldn't find any \cir alone in the arrows section, only \cir…. I think I will now concentrate on my exams and come back to this thing in summer.

The exchange with Kris also had the purpose of informing him of the broken links on this page. They are now mostly fixed, with a couple removed and one still broken. Will inform Kris in next mail. So if anyone has experienced the broken links, you can go back and find them fixed :).

Not the answer you're looking for? Browse other questions tagged arrows xy-pic or ask your own question.